Although many studies have investigated the clinical importance of sleep apnea on rapid eye movement (REM) and non-REM (NREM) sleep, the relationship between behavioral performance and apneic events during different sleep phases remains unclear. In the present study, we sought to investigate the effect of sleep phase fragmentation due to sleep-disordered breathing (SDB) during REM and NREM on the vigilance and sustainability of attention based on psychomotor vigilance task (PVT) performance.

From a pool of subjects who underwent consecutive diagnostic polysomnography (PSG) for obstructive sleep apnea, 163 adult subjects with both REM and NREM sleep ≥ 30 min were enrolled for our study and performed a standardized 10-min PVT. The main outcome variables of the PVT were mean reaction time (RT), PVT Lapse count, and the slope of the reciprocal RT. Subjective sleepiness was measured using the Epworth Sleepiness Scale (ESS).

After multivariate linear regression analysis with adjustment for age, sex, body mass index, and the apnea-hypopnea index (AHI) of the counterpart sleep phase, we found that AHI during NREM (AHINREM) compared to AHI during REM (AHIREM) was significantly associated with PVT lapses.

Our results suggest that SDB during NREM has a significant impact on vigilance lapses compared to that of REM. 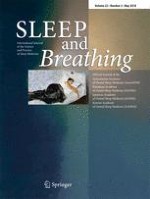