Normative data for the “Sniffin’ Sticks” including tests of odor identification, odor discrimination, and olfactory thresholds: an upgrade based on a group of more than 3,000 subjects | springermedizin.de Skip to main content
TOOLBAR 1 2 3 4
SUCHE MENÜ 1 2 3 4

“Sniffin’ Sticks” is a test of nasal chemosensory function that is based on pen-like odor dispensing devices, introduced some 10 years ago by Kobal and co-workers. It consists of tests for odor threshold, discrimination, and identification. Previous work established its test-retest reliability and validity. Results of the test are presented as “TDI score”, the sum of results obtained for threshold, discrimination, and identification measures. While normative data have been established they are based on a relatively small number of subjects, especially with regard to subjects older than 55 years where data from only 30 healthy subjects have been used. The present study aimed to remedy this situation. Now data are available from 3,282 subjects as compared to data from 738 subjects published previously. Disregarding sex-related differences, the TDI score at the tenth percentile was 24.9 in subjects younger than 15 years, 30.3 for ages from 16 to 35 years, 27.3 for ages from 36 to 55 years, and 19.6 for subjects older than 55 years. Because the tenth percentile has been defined to separate hyposmia from normosmia, these data can be used as a guide to estimate individual olfactory ability in relation to subject’s age. Absolute hyposmia was defined as the tenth percentile score of 16–35 year old subjects. Other than previous reports the present norms are also sex-differentiated with women outperforming men in the three olfactory tests. Further, the present data suggest specific changes of individual olfactory functions in relation to age, with odor thresholds declining most dramatically compared to odor discrimination and odor identification.

Titel
Normative data for the “Sniffin’ Sticks” including tests of odor identification, odor discrimination, and olfactory thresholds: an upgrade based on a group of more than 3,000 subjects
Autoren:
T. Hummel
G. Kobal
H. Gudziol
A. Mackay-Sim 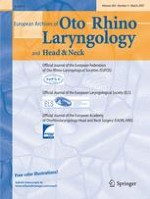