Pathogenic sequence variants in the IQ motif– and Sec7 domain–containing protein 2 (IQSEC2) gene have been confirmed as causative in the aetiopathogenesis of neurodevelopmental disorders (intellectual disability, autism) and epilepsy. We report on a case of a family with three sons; two of them manifest delayed psychomotor development and epilepsy. Initially proband A was examined using a multistep molecular diagnostics algorithm, including karyotype and array-comparative genomic hybridization analysis, both with negative results. Therefore, probands A and B and their unaffected parents were enrolled for an analysis using targeted “next-generation” sequencing (NGS) with a gene panel ClearSeq Inherited DiseaseXT (Agilent Technologies) and verification analysis by Sanger sequencing. A novel frameshift variant in the X-linked IQSEC2 gene NM_001111125.2:c.1813_1814del, p.(Asp605Profs*3) on protein level, was identified in both affected probands and their asymptomatic mother, having skewed X chromosome inactivation (XCI) (100:0). As the IQSEC2 gene is a known gene escaping from XCI in humans, we expect the existence of mechanisms maintaining the normal or enough level of the IQSEC2 protein in the asymptomatic mother. Further analyses may help to the characterization of the presented novel frameshift variant in the IQSEC2 gene as well as to elucidate the mechanisms leading to the rare asymptomatic phenotypes in females. 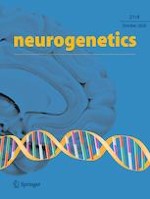 Genetic Creutzfeldt-Jakob disease in Sardinia: a case series linked to the PRNP R208H mutation due to a single founder effect

Compound heterozygosity for an expanded (GAA) and a (GAAGGA) repeat at FXN locus: from a diagnostic pitfall to potential clues to the pathogenesis of Friedreich ataxia