To study the ability of a novel bovine serum albumin-angiotensin II (BSA-Ang II) conjugate to effect responses of the AT1 angiotensin II receptor subtype mediated by the G-protein-coupled and the beta-arrestin pathways.

Addition of a high molecular weight molecule to Ang II reduced its AT1 receptor binding affinity, but did not significantly alter stimulation of aldosterone release or water consumption. The BSA-Ang II conjugate caused a greater saline appetite than Ang II suggesting that it may be a more efficacious agonist of this beta-arrestin-mediated response than Ang II. The higher potency calcium signaling response suggests that the G-protein-coupled responses predominate at physiological concentrations of Ang II, while the beta-arrestin response requires pathophysiological or pharmacological concentrations of Ang II to occur. 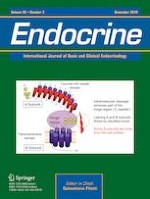 Author Response to “In Defense of the UVB-Vitamin D-Cancer Hypothesis.”

Metformin in overweight and obese women with gestational diabetes: a propensity score-matched study