To report novel mutations in the CRB1 gene in two patients with early-onset retinal dystrophy (EORD) and the longitudinal clinical course of EORD.

The patients were two unrelated Japanese children. Standard ophthalmic examinations including perimetry, electroretinography, and optical coherence tomography were performed on both patients. Whole exomes of the patients and their nonsymptomatic parents were analyzed using a next-generation sequence (NGS) technique.

Patient 1 was noted to have esotropia and hyperopia at age 3. His decimal best-corrected visual acuity (BCVA) was 0.6 OD and 0.3 OS at age 6 with de-pigmentation of the retinal pigment epithelium (RPE). At age 19, his central vision was still preserved; however, numerous pigment granules were present in the retina. NGS analysis revealed a p.R632X nonsense and c.652 + 1_652 + 4delGTAA splice site mutations in the CRB1 gene. Patient 2 was noted to have hyperopia at age 3. His decimal BCVA at age 6 was 0.3 OD and 0.4 OS with de-pigmented RPE. The degree of retinal pigmentation was increased but his BCVA was good until the age of 14 years. NGS analysis revealed c.652 + 1_652 + 4delGTAA and c.652 + 1_652 + 2insT splice site mutations in the CRB1 gene.

The phenotypes of these novel mutations for EORD are typical of CRB1-associated EORD (LCA8). They were slowly progressive until the second decade of life. 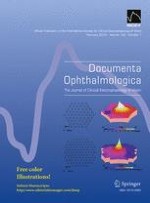 The effect of cobalt on the human eye