In the last few years, multiple methods to measure the grade of immunosuppression and thus to enable effect-related immune monitoring have been assessed. Cytokines and chemokines, especially IL-6 that can be routinely measured in most hospitals, showed some correlation with clinical events after pediatric kidney transplantation, but they seemed to be insufficient for immune monitoring and failed to predict future infectious events [ 35]. Different markers in the urine, which include proteins such as perforin, granzyme B, CXCL9, CXCL10, CXCR3 or CD3E, or mRNAs, as well as markers in the blood, for example, donor-specific antibody (DSA) functionality, TRIB1, FOXP3, kSORT, miR-142-5p, T cell subgroups, IFNy-ELISpot, B cell-related genes, and others, have been tested for their relation to immunological events such as acute and chronic rejection or operational tolerance. However, none of these has been validated in independent cohorts [ 15].
Functional assays to determine immune function seem to be a promising tool to optimize the dosing of immunosuppressants after solid organ transplantation. ImmuKnow® (Cylex, Columbia, MD, USA) is a commercially available assay measuring the amount of intracellular adenosine triphosphate (ATP) produced by CD4 T cells from whole blood after stimulation with phytohemagglutinin. Some observational trials observed low ATP levels in association with infections and high ATP levels in case of rejections after kidney transplantation [ 17] whereas other studies did not find any predictive value of ImmuKnow® assay for rejection or infection after kidney transplantation, especially after T cell depleting induction therapy [ 18]. In a randomized controlled trial after liver transplantation, the adjustment of the immunosuppressive therapy was based on ATP concentration of ImmuKnow® assay and resulted in less bacterial and fungal infections without influence to rejection rate [ 19]. However, randomized controlled trials after kidney transplantation are missing and the ImmuKnow® data are inconsistent and a meta-analysis of six studies did not support the use of the ImmuKnow® assay to predict the risk of infections and acute rejections after renal transplantation [ 20]. Another commercially available functional assay is the non-pathogen-specific QuantiFERON Monitor® test (Qiagen) detecting global cell-mediated immune response by plasma interferon-gamma (IFNy) levels after stimulation of the whole blood with a combination of antigens. An observational cohort study after solid organ transplantation using the QuantiFERON Monitor® showed significant lower IFNy levels in case of post-transplant infections [ 21], but interventional as well as pediatric data are lacking. Further studies are necessary to define cut-off levels and to analyze the benefit of intervention based on QuantiFERON Monitor® test. Neither ImmuKnow® nor QuantiFERON Monitor® reached clinical practice to date.
Anzeige
The torque teno virus (TTV) load was thought to serve as a possible endogenous marker of the immune function. TTV is a non-pathogenic, ubiquitous, circular single-strand DNA virus which mirrors the net state of immunosuppression [ 22]. TTV load increases under immunosuppressive therapy, and replication is inversely correlated with the number and function of T cells [ 22‐ 24]. Several studies reported an association of TTV load with the post-transplant presence of infections or rejections [ 16, 25‐ 27], and recently, an observational trial confirmed that high TTV load is related to an increased risk of post-transplant infections and decreased risk of rejections after kidney transplantation [ 28]. However, in liver-transplanted children, it was reported that TTV replication is influenced not only by immune status but also by viral coinfection resulting in lower TTV load in case of hepatitis E virus infection [ 29]. Many studies showed a poor quality with a low level of evidence [ 22], the results varied, and pediatric data after kidney transplantation are missing. To assess the impact of TTV load as a surrogate marker after kidney transplantation, the measurement technique should be standardized and interfering factors as age, immunosuppressive regimen, and coinfection with other virus types have to be characterized [ 22]. Until now, there have been no randomized controlled interventional trials using TTV viral load for steering of immunosuppression and confirm an additional benefit of post-transplant TTV monitoring. Future studies will show whether the measurement of TTV replication will become an additional biomarker to steer immunosuppressive therapy.

Virus-specific T cells (Tvis) have been shown to play a key role in the control of virus replication [ 36]. Virus-specific CD4-positive T cells (CD4 Tvis) detect viral epitopes which are presented on major histocompatibility complex (MHC) class II molecules on antigen-presenting cells such as B lymphocytes, dendritic cells, and macrophages, and CD8-positive T cells (CD8 Tvis) locate and destroy virus-infected cells which present viral antigens by MHC class I molecules. Antigen-specific CD4 and CD8 T cells have been identified in most studies after stimulation with pooled peptides derived from virus lysate representing a broad answer against all viral surface antigens.
Also in children, it has been shown that the number of Tvis is associated with the risk of virus diseases [ 30‐ 33]. Regarding the high incidence of post-transplant viral complications (especially in children), prophylaxis, diagnosis, and treatment of viral infections may be improved by the inclusion of Tvis-analysis in routine monitoring after kidney transplantation [ 36, 37]. Besides, there is increasing evidence that Tvis mirror not only the virus-specific but also the general cellular immune defense. Thus, Tvis may serve as a marker to identify over-immunosuppression [ 36‐ 38].
A number of different assays are currently available for the detection of the cellular response to viral antigens [ 36], the main ones being the enzyme-linked immunospot (ELISpot) assay, the enzyme-linked immunosorbent assay (ELISA), intracellular cytokine staining followed by fluorescence-activated cell sorting (FACS) analysis, and MHC multimer staining. ELISpot, ELISA, and FACS assays are based on virus-specific in vitro stimulation of T cells inducing activation markers. Stimulation is performed by antigens such as virus-infected cell lysates, virus particles, proteins, or peptides. The easiest methodology is the ELISA, where cytokines such as IFNy can be measured in the supernatant of stimulated cells, and the ELISpot assay where IFNy is locally captured in microtiter plates. The disadvantage of these methods is that they do not allow a subclassification of stimulated cells, i.e., in CD4- and CD8-positive cells. The FACS analysis using intracellular cytokine staining followed by flow cytometry overcomes this drawback and allows a complete sub-characterization of Tvis, but comes at the price of a longer and more difficult methodology. In contrast, MHC multimer staining is rapid and independent of stimulation but has the disadvantage that special MHC/peptide complexes have to be manufactured for each antigen and MHC allele so that this test is expensive and cumbersome, making it unfeasible for use in routine care.

Post-transplant monitoring has shown that the Tvis-levels fluctuated depending on the intensity of immunosuppression in pediatric kidney recipients. During the initial post-transplant period—at the time of intensified immunosuppressive therapy—the number of Tvis was decreased and showed an increase after reduction of the immunosuppressive drugs (own data, not published). Interestingly, the risk of viremia, such as EBV, correlated with the number of CD4 Tvis, not only against EBV but also against other virus types as CMV and adenovirus (ADV) (own data, not published). Accordingly, it is hypothesized that Tvis represent not only the virus-specific but also the general cellular immune defense and thereby correlates with the individual susceptibility to infections. It is also speculated that a high number of Tvis could also represent underimmunosuppression and might therefore be associated with a higher risk for immunological events such as acute and chronic cellular and humoral infections. Serving as a marker of over- or under-immunosuppression, additional post-transplant monitoring of Tvis levels might therefore optimize dosing of immunosuppressive drugs compared to blood level monitoring alone. On this basis, we conducted the investigator-initiated, multicenter IVIST trial, which is the first randomized, controlled trial to consider the benefit of additional steering of immunosuppressive drugs by Tvis levels using intracellular cytokine staining followed by FACS analysis [ 34, 38]. Sixty-four pediatric kidney recipients were randomized 1:1 4 weeks after transplantation either to a control group (n=33) with classical trough level monitoring of immunosuppressants or to an intervention group (n=31) with additional steering by Tvis levels. Regarding high prevalence, even in childhood and long-term persistency after primary infection, CD4 Tvis against CMV, ADV, and herpes simplex virus (HSV) were selected as being most suitable for monitoring after pediatric kidney transplantation. Both study groups received the same immunosuppressive regimen consisting of cyclosporin A and everolimus, with the same target range of trough levels. The primary endpoint of the study was the estimated glomerular filtration rate (eGFR) 2 years after transplantation. Secondary endpoints were the number and severity of viral infections and the exposure to immunosuppressive drugs, as well as biopsy-proven acute rejections and safety. In terms of an effect-related drug monitoring, the study design of the IVIST trial aimed to realize the personalization of immunosuppressive management after transplantation. The primary analysis detected no difference in eGFR between the intervention and control group 2 years after transplantation [ 34]. Patients in the intervention group received significantly lower daily doses (mg/m 2) of everolimus (0.8±0.3 vs. 1.2±0.5, p=0.004) and numerically lower doses of cyclosporin A (78.4±20.0 vs. 88.4±26.5, p=0.13) resulting in significantly lower trough levels (μg/L) of everolimus (3.5±0.7 vs. 4.5±0.8, p<0.001) and of cyclosporin A (47.4±9.9 vs. 64.1±11.1, p<0.001). In addition, fewer patients in the intervention group received glucocorticoids 2 years after transplantation (20% vs. 47%, p=0.04). Caused by CD4 Tvis <2 cells/μl a total of 125 dose reductions of immunosuppressants (mainly based on ADV-Tvis) was performed in 28/31 children of the intervention group with a median of 4 Tvis-based dose reductions (range 0–10) per patient. Nearly half of the Tvis-based dose reductions were carried out in the first 6 months after transplantation. Only three Tvis-based dose increases were implemented in two children. Despite reduced immunosuppressive therapy, the number of biopsy-proven acute rejections did not increase in the intervention group but was even numerically lower than in the control group (p=0.11). Furthermore, the intervention group showed a numerically lower risk for EBV DNAemia (p=0.09). The numbers of DSAs and (serious) adverse events were comparable in both groups [ 34]. Consequently, the IVIST trial demonstrated that additional steering of immunosuppressive therapy by Tvis levels is safe and reduces exposure to immunosuppressive drugs with significantly lower trough levels but without increasing the risk of acute rejections. It is the first randomized controlled trial after pediatric kidney transplantation to prove that an effect-related drug monitoring by Tvis personalizes the pediatric post-transplant care and might serve as an additional marker that might complement—but obviously not replace—traditional trough level monitoring.

We consent to the terms of publication in the Molecular and Cellular Pediatrics.

The authors declare that they have competing interests concerning the content of this Mini Review. The authors have a bias towards their own published data.
Open AccessThis article is licensed under a Creative Commons Attribution 4.0 International License, which permits use, sharing, adaptation, distribution and reproduction in any medium or format, as long as you give appropriate credit to the original author(s) and the source, provide a link to the Creative Commons licence, and indicate if changes were made. The images or other third party material in this article are included in the article's Creative Commons licence, unless indicated otherwise in a credit line to the material. If material is not included in the article's Creative Commons licence and your intended use is not permitted by statutory regulation or exceeds the permitted use, you will need to obtain permission directly from the copyright holder. To view a copy of this licence, visit http://​creativecommons.​org/​licenses/​by/​4.​0/​. 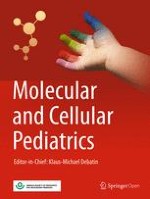