Spirituality and its role in nurses’ performance has gained much attention from the nursing researchers. But there is still some ambiguity about its role in improving the nurses’ empathetic behaviors and factors that mediate this relation. To fill these research gaps, a sample of 247 Muslim nurses in a hospital at Shiraz, Iran, were selected and studied. Data were gathered by distributing the standard questionnaires among all of the nurses. Also, structural equation modeling and ANOVA test were used to analyze the data. It was found that nurses’ spiritual orientation has a positive effect on their psychological capital and empathetic behaviors. Also, it was found that their work engagement has been affected by their level of psychological capital. Moreover, there was a significant difference between the spirituality of single and married nurses, in a way that married nurses were more spiritual. As a conclusion, it can be said that nurses’ empathetic behaviors are a reflection of their spiritual orientation and marriage status. 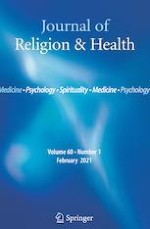 Development and Validation of the Ethicotherapy Quality of Life Questionnaire

Nursing Students’ Spiritual Orientations and Their Attitudes Toward the Principles of Dying with Dignity: A Sample from Turkey