Since the seminal finding almost 50 years ago that exercise training increases mitochondrial content in skeletal muscle, a considerable amount of research has been dedicated to elucidate the mechanisms inducing mitochondrial biogenesis. The discovery of peroxisome proliferator-activated receptor γ co-activator 1α as a major regulator of exercise-induced gene transcription was instrumental in beginning to understand the signals regulating this process. However, almost two decades after its discovery, our understanding of the signals inducing mitochondrial biogenesis remain poorly defined, limiting our insights into possible novel training modalities in elite athletes that can increase the oxidative potential of muscle. In particular, the role of mitochondrial reactive oxygen species has received very little attention; however, several lifestyle interventions associated with an increase in mitochondrial reactive oxygen species coincide with the induction of mitochondrial biogenesis. Furthermore, the diminishing returns of exercise training are associated with reductions in exercise-induced, mitochondrial-derived reactive oxygen species. Therefore, research focused on altering redox signaling in elite athletes may prove to be effective at inducing mitochondrial biogenesis and augmenting training regimes. In the context of exercise performance, the biological effect of increasing mitochondrial content is an attenuated rise in free cytosolic adenosine diphosphate (ADP), and subsequently decreased carbohydrate flux at a given power output. Recent evidence has shown that mitochondrial ADP sensitivity is a regulated process influenced by nutritional interventions, acute exercise, and exercise training. This knowledge raises the potential to improve mitochondrial bioenergetics in the absence of changes in mitochondrial content. Elucidating the mechanisms influencing the acute regulation of mitochondrial ADP sensitivity could have performance benefits in athletes, especially as these individuals display high levels of mitochondria, and therefore are subjects in whom it is notoriously difficult to further induce mitochondrial adaptations. In addition to changes in ADP sensitivity, an increase in mitochondrial coupling would have a similar bioenergetic response, namely a reduction in free cytosolic ADP. While classically the stoichiometry of the electron transport chain has been considered rigid, recent evidence suggests that sodium nitrate can improve the efficiency of this process, creating the potential for dietary sources of nitrate (e.g., beetroot juice) to display similar improvements in exercise performance. The current review focuses on these processes, while also discussing the biological relevance in the context of exercise performance. 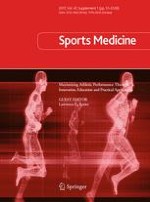 Sweating Rate and Sweat Sodium Concentration in Athletes: A Review of Methodology and Intra/Interindividual Variability

Training the Gut for Athletes

The ‘Critical Power’ Concept: Applications to Sports Performance with a Focus on Intermittent High-Intensity Exercise