The increasing prevalence of extensively drug-resistant (XDR) Pseudomonas aeruginosa infections is due to the global spread of defined high-risk clones (HRC). Among them, ST175 is particularly frequent in Spain and France. Here, we evaluated O-antigen serotyping and MALDI-TOF as typing methods for the early identification of ST175. O-antigen (O4) serotyping and MALDI-TOF biomarker peak-based recognition models were tested in several strain collections, including 206 non-duplicated P. aeruginosa clinical isolates collected in 2016. Resistance profiles were determined by broth microdilution and clonal epidemiology by pulsed-field gel electrophoresis (PFGE) and multilocus sequence typing (MLST). Up to 24.3% of the isolates were XDR and 28.2% non-susceptible to meropenem, while resistance to ceftolozane/tazobactam (2.9%) and colistin (0.5%) was infrequent. Half of all XDR isolates belonged to ST175 and most of them were only susceptible to ceftolozane/tazobactam and colistin. A model based on the detection of one MALDI-TOF biomarker peak yielded negative and positive predicted values (NPV/PPV) for the detection of ST175 of 100%/51.9%, whereas NPV/PPV for a model based on two biomarker peaks were 99.4%/87.1% and for O4 serotyping, 99.4%/84.1%. Both, O4 serotyping and MALDI-TOF biomarker peak analysis, proved to be sensitive and specific methods that could be easily incorporated in the routine workflow for the early detection of ST175 HCR. Since ST175 is associated with defined XDR profiles, with most isolates only being susceptible to colistin and ceftolozane/tazobactam, these simple techniques could be useful for optimizing semi-empiric antipseudomonal treatments in areas where this HRC is prevalent. 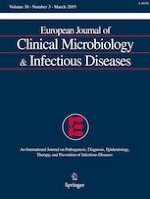 Opposite effects of Vaccinia and modified Vaccinia Ankara on trained immunity