To investigate the 1-year effects of tadalafil on storage and voiding function in patients with lower urinary tract symptoms (LUTS) suggestive of benign prostatic hyperplasia (LUTS/BPH) based on a urodynamic study.

In a one-armed, prospective study, 105 untreated outpatients with LUTS/BPH received 5 mg tadalafil every day for 12 months. Subjective symptoms and objective findings on voiding and storage functions, obtained through urodynamic studies that included cystometry and pressure flow study, were evaluated before, at 3 months, and at 12 months of treatment.

The analysis included 94 patients with a mean age of 70.7 years and a mean prostate volume of 44.5 mL. Subjective symptom parameters of LUTS were significantly ameliorated after 3 months, and progressively improved until study conclusion. Similarly, monitoring of storage and voiding functions revealed significant improvements after 3 months that continued to improve until 12 months. In 49 patients who revealed detrusor overactivity during cystometry at the baseline assessment, uninhibited detrusor contractions disappeared in 15 (30.6%) patients after 3 months (p = 0.02), and in 22 (44.9%) after 12 months (p < 0.001). Mean maximum flow rate significantly increased by 2.9 mL/s during the 12-month treatment (p < 0.001), whereas mean bladder outlet obstruction index significantly decreased from 59.5 at baseline to 45.7 at 3 months (p = 0.001), and to 42.9 at 12 months (p < 0.001).

Tadalafil significantly improved storage and voiding functions, along with LUTS, in patients with LUTS/BPH during a 1-year treatment. 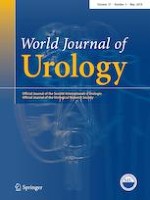 The relationship between body-mass index, physical activity, and pathologic and clinical outcomes after radical prostatectomy for prostate cancer

Is there a place for indwelling transurethral catheterization in women with febrile urinary tract infection? A prospective randomized trial

Survival of the artificial urinary sphincter in a changing patient profile