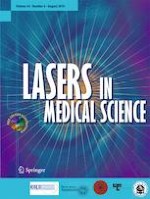 Clinical efficacy of laser combined with menstrual regulation in the treatment of female melasma: a retrospective study