To analyze the natural history of small asymptomatic pancreatic neuroendocrine tumors (PanNET) and to present a matched comparison between groups who underwent either initial observation or resection. Management approach for small PanNET is uncertain.

Incidentally discovered, sporadic, small (<3 cm), stage I–II PanNET were analyzed retrospectively between 1993 and 2013. Diagnosis was determined either by pathology or imaging characteristics. Intention-to-treat analysis was applied.

A total of 464 patients were reviewed. Observation was recommended for 104 patients (observation group), and these patients were matched to 77 patients in the resection group based on tumor size at initial imaging. The observation group was significantly older (median 63 vs. 59 years, p = 0.04) and tended towards shorter follow-up (44 vs. 57 months, p = 0.06). Within the observation group, 26 of the 104 patients (25 %) underwent subsequent tumor resection after a median observation interval of 30 months (range 7–135). At the time of last follow-up of the observation group, the median tumor size had not changed (1.2 cm, p = 0.7), and no patient had developed evidence of metastases. Within the resection group, low-grade (G1) pathology was recorded in 72 (95 %) tumors and 5 (6 %) developed a recurrence, which occurred after a median of 5.1 (range 2.9–8.1) years. No patient in either group died from disease. Death from other causes occurred in 11 of 181 (6 %) patients.

In this study, no patient who was initially observed developed metastases or died from disease after a median follow-up of 44 months. Observation for stable, small, incidentally discovered PanNET is reasonable in selected patients.
Anzeige 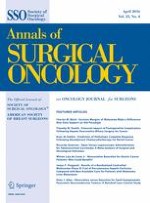 Is Tumor Detachment from Vascular Structures Equivalent to R0 Resection in Surgery for Colorectal Liver Metastases? An Observational Cohort

Is Linitis Plastica a Contraindication for Surgical Resection: A Multi-Institution Study of the U.S. Gastric Cancer Collaborative