Children with chronic kidney disease (CKD) are at risk for obstructive sleep apnea (OSA) and hypertension. The objectives of this study were to explore associations between OSA severity using the apnea-hypopnea-index(AHI) and obstructive apnea-hypopnea-index(OAHI) on polysomnography (PSG), OSA symptoms, and measures of hypertension in children with CKD.

Nineteen children and adolescents completed a PSG and questionnaires and thirteen completed ABPMs. Mean (standard deviation) age at the time of the sleep study was 14.1 (3.2) years. Eleven (58%) participants had CKD stage two, and eight (42%) had stage 3–4. None of the participants were found to have OSA on PSG. One participant had a positive ESS score (≥ 11) and five participants had positive PSQ scores (≥  eight). Night systolic and diastolic pressures were strongly correlated with the OAHI (r = 0.67 and r = 0.69, respectively, p < 0.05), while the AHI was not correlated with any blood pressure measures.

Our study did not find OSA on PSG in children with predominantly mild to moderate CKD. The OAHI was found to be strongly correlated with nighttime blood pressures. Future prospective studies with a larger sample size are needed to monitor for potential progression of symptoms and findings on PSG in pediatric patients as they evolve across the spectrum of CKD. 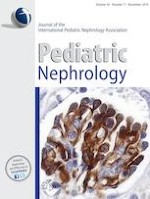 A rare cause of proteinuria after kidney transplantation: Questions

Eculizumab in atypical hemolytic uremic syndrome: strategies toward restrictive use