From pre-existing multislice spiral computed tomography (MSCT) datasets, we selected 20 cases of 11 female and 9 male patients aged 6.1–24 years who were clinically and radiographically symmetrical (group 1) plus 20 cases of 8 female and 12 male patients aged 5.7–23.9 years who had OAVS (group 2). After three-dimensional reconstruction of the datasets, the volumes of the left and right maxillary sinuses were calculated and compared based on patient groups and based on the sides affected or unaffected by OAVS. To this end, the OAVS patients were subdivided into a group in whom both external acoustic pores were radiographically present (group 2a) and a group in whom the pore on the affected side was congenitally missing (group 2b).

Intrarater reliability was very high (0.997). Significantly larger volumes of the maxillary sinuses, amounting to a mean of 13.4 ml, were observed in the control group than in the asymmetric OAVS groups where the volumes averaged 9.8 ml or 10.3 ml, respectively (p = 0.03). No statistically significant differences in sinus volumes were found between the two OAVS groups (p = 0.557) and between the sides affected or unaffected by the OAVS (p = 0.8311 in group 2a and 0.4961 in group 2b).

Overall, we found the volumes of both maxillary sinuses to be somewhat smaller in the asymmetric patients than in the symmetric control group. This might indicate that OAVS was associated with a mild generalized hypoplasia of the maxilla, but significantly different sinus volumes were not seen between the affected and unaffected sides.
Anzeige 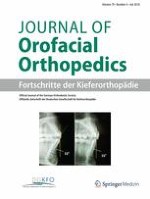 Prevalence of temporomandibular disorders in patients with Hashimoto thyroiditis