Neuroinflammation is a consequence of overeating and may predispose to the development of cognitive decline and neurological disorders. This study aimed to evaluate the impact of omega-3 supplementation on memory and neuroinflammatory markers in rats fed a high-fat diet. Male Wistar rats were divided into four groups: standard diet (SD); standard diet + omega-3 (SD + O); high fat diet (HFD); and high fat diet + omega-3 (HFD + O). Diet administration was performed for 20 weeks and omega-3 supplementation started at the 16th week. HFD significantly increased body weight, while omega-3 supplementation did not modify the total weight gain. However, animals from the HFD + O group showed a lower level of visceral fat along with an improvement in insulin sensitivity following HFD. Thus, our results demonstrate a beneficial metabolic role of omega-3 following HFD. On the other hand, HFD animals presented an impairment in object recognition memory, which was not recovered by omega-3. In addition, there was an increase in GFAP-positive cells in the cerebral cortex of the HFD group, showing that omega-3 supplementation can be effective to decrease astrogliosis. However, no differences in GFAP number of cells were found in the hippocampus. We also demonstrated a significant increase in gene expression of pro-inflammatory cytokines IL-6 and TNF-α in cerebral cortex of the HFD group, reinforcing the anti-inflammatory role of this family of fatty acids. In summary, omega-3 supplementation was not sufficient to reverse the memory deficit caused by HFD, although it played an important role in reducing the neuroinflammatory profile. Therefore, omega-3 fatty acids may play an important role in the central nervous system, preventing the progression of neuroinflammation in obesity. 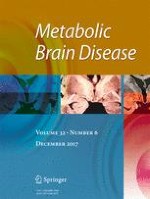 Erratum to: Asparagine synthetase deficiency-report of a novel mutation and review of literature

Novel SPG20 mutation in an extended family with Troyer syndrome