While some RCTs have observed efficacy for omega-3 supplementation in reducing antisocial behavior, the role of psychopathic personality and gender in moderating treatment outcome has not been examined. This study examines whether omega-3 supplementation reduces antisocial behavior, and whether any treatment effects are a function of gender and psychopathy. Three hundred and twenty-four schoolchildren with a mean age of 11.9 years were randomized into 3 groups: omega-3 (N = 108), placebo (N = 110), and no-treatment controls (N = 106). Parent and child reports of child antisocial and aggressive behavior and psychopathic-like personality were collected at 0 months (baseline), 6 months (end of treatment), and 12 months (6 months post-treatment). A group × time × gender interaction (p = .016) indicated that only females in the omega-3 group showed a significant reduction in antisocial behavior 6 months post-treatment compared to baseline (d = .35), whereas the females in the two control groups showed no change over time. A group x time x psychopathy interaction (p < .006) was also observed, with psychopathic personality levels moderating treatment outcome. Children in the omega-3 group with high (but not low) psychopathic-like personality showed significant improvements in child-reported antisocial behavior at the end of treatment (d = .19) Results suggest that omega-3 supplementation may be helpful in reducing childhood antisocial and aggressive behavior in females, and those with psychopathic-like personalities. 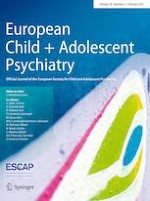 The forest, the trees, and the leaves in preterm children: the impact of prematurity on a visual search task containing three-level hierarchical stimuli

The prevalence of behavioral and emotional problems among Chinese school children and adolescents aged 6–16: a national survey

Did we take the right train in promoting the concept of “Neurodevelopmental disorders”?

Sensory processing related to attention in children with ASD, ADHD, or typical development: results from the ELENA cohort