Chronic fatigue syndrome (CFS) is a heterogeneous disease which presents with pronounced disabling fatigue, sleep disturbances, and cognitive impairment that negatively affects patients’ functional capability. CFS remains a poorly defined entity and its etiology is still in question. CFS is neither a novel diagnosis nor a new medical condition. From as early as the eighteenth century, a constellation of perplexing symptoms was observed that resembled symptoms of CFS. Commencing with “febricula” and ending with CFS, many names for the disease were proposed including neurocirculatory asthenia, atypical poliomyelitis, Royal Free disease, effort syndrome, Akureyri disease, Tapanui disease, chronic Epstein-Barr virus syndrome, and myalgic encephalitis. To date, it remains unclear whether CFS has an autoimmune component or is a condition that precedes a full-blown autoimmune disease. Research suggests that CFS may overlap with other diseases including postural orthostatic tachycardia syndrome (POTS), autoimmune syndrome induced by adjuvants (ASIA), and Sjögren’s syndrome. Additionally, it has been postulated that the earliest manifestations of some autoimmune diseases can present with vague non-specific symptoms similar to CFS. Sometimes only when exposed to a secondary stimulus (e.g., antigen) which could accelerate the natural course of the disease would an individual develop the classic autoimmune disease. Due to the similarity of symptoms, it has been postulated that CFS could simply be an early manifestation of an autoimmune disease. This paper will provide a historical background review of this disease and a discussion of CFS as an entity overlapping with multiple other conditions. 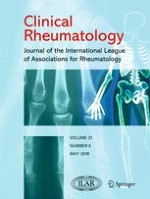 Comparative efficacy and safety of biosimilar adalimumab and originator adalimumab in combination with methotrexate in patients with active rheumatoid arthritis: a Bayesian network meta-analysis of randomized controlled trials

Prevalence of vitamin D deficiency in chronic and subacute low back pain patients in India: a triple-arm controlled study