Epithelial myoepithelial carcinoma (EMCa) is a rare but well characterized biphasic salivary gland malignancy with several variant morphologies. Oncocytic and apocrine EMCa are uncommon variants that constitute up to 8 % of all EMCa. Both variants invoke an eosinophilic or oncocytic differential diagnosis and challenge the traditional requirement of clear myoepithelial cells for EMCa. Oncocytic EMCa occurs in patients a decade older than conventional EMCa. This variant is often papillary with calcification and associated with sebaceous components and occurs in older individuals. Apocrine EMCa is named for its apocrine ductal component, which may be mistaken for salivary duct carcinoma. In this variant, the epithelial component often shows overgrowth in a cribriform or even solid pattern and is immunophenotypically defined by androgen receptor and gross cystic disease fluid protein 15 positivity. The most important aspect of differentiating both oncocytic and apocrine EMCa from other salivary oncocytic tumors is recognition of the biphasic nature of these variants and confirmation that the abluminal outer layer consists of plump, ‘activated’ myoepithelial cells, regardless of tinctorial characteristics. Both oncocytic and apocrine EMCa behave very indolently in the limited literature to date. 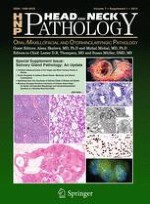 Sclerosing Polycystic Adenosis of Salivary Glands: A Review with Some Emphasis on Intraductal Epithelial Proliferations

An Update on Salivary Gland Pathology

Cribriform Adenocarcinoma of the Tongue and Minor Salivary Glands: A Review