The aim of this double-blind, randomized trial was to evaluate the 1-year clinical performance of a bulk-fill flowable and a regular nanofilled composite in non-carious cervical lesions (NCCLs).

Twenty-two subjects with at least two NCCLs were enrolled in the study. A total of 89 restorations were performed by a single operator using Filtek Supreme (FS) Ultra Universal or Filtek Bulk (FB) Fill Flowable. A universal adhesive (Scotchbond™ Universal Adhesive) was used with a self-etching approach in dentin. The restorations were evaluated by two independent and previously calibrated examiners at baseline (7 days), 6 months and 1 year, according to the USPHS modified criteria. Mann–Whitney U test was used to analyze the differences between composites and Wilcoxon signed rank test for comparisons between the baseline and follow-ups (α = 5%).

One restoration was considered clinically unacceptable due to loss of retention after 6 months in the FS group. FS presented statistically high scores for surface roughness when compared to FB after 1 year (p < 0.05), but both were considered clinically acceptable. After 1 year, the frequency of clinically unacceptable rates was 3.3% for anatomical form in the FB group, 1.1% for retention in the FS group, and 2.2% for marginal adaptation in both groups. All restorations, in both groups, presented score 0 over the 1-year period for marginal staining, postoperative sensitivity, and secondary caries.

Both composite resins showed acceptable clinical performances for the restoration of NCCLs after 1 year.

Both bulk-fill flowable and regular nanofilled composites showed good clinical performances for the restoration of NCCLs after 1 year. 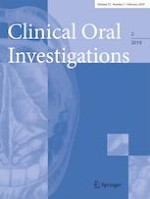 The association with xerostomia from sialadenitis and the jaw osteonecrosis in head and neck cancer population: a nationwide cohort study