52 patients were enrolled in the study: 24 received FTSG and 28 synthetic mesh. Four recurrences (7.7%) were found at 1-year follow-up, two in each group. There were no significant differences regarding pain, patient satisfaction or aesthetic outcome between the groups. Strength in the abdominal wall was not generally improved in the study population and there was no significant difference between the groups. 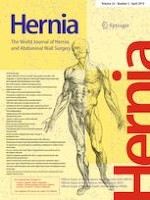