Tepotinib (MSC2156119J) is an oral, potent, highly selective MET inhibitor. This open-label, phase I study in healthy volunteers (EudraCT 2013-003226-86) investigated its mass balance (part A) and absolute bioavailability (part B). In part A, six participants received tepotinib orally (498 mg spiked with 2.67 MBq [14C]-tepotinib). Blood, plasma, urine, and feces were collected up to day 25 or until excretion of radioactivity was <1% of the administered dose. In part B, six participants received 500 mg tepotinib orally as a film-coated tablet, followed by an intravenous [14C]-tepotinib tracer dose (53–54 kBq) 4 h later. Blood samples were collected until day 14. In part A, a median of 92.5% (range, 87.1–96.9%) of the [14C]-tepotinib dose was recovered in excreta. Radioactivity was mainly excreted via feces (median, 78.7%; range, 69.4–82.5%). Urinary excretion was a minor route of elimination (median, 14.4% [8.8–17.7%]). Parent compound was the main constituent in excreta (45% [feces] and 7% [urine] of the radioactive dose). M506 was the only major metabolite. In part B, absolute bioavailability was 72% (range, 62–81%) after oral administration of 500 mg tablets (the dose and formulation used in phase II trials). In conclusion, tepotinib and its metabolites are mainly excreted via feces; parent drug is the major eliminated constituent. Oral bioavailability of tepotinib is high, supporting the use of the current tablet formulation in clinical trials. Tepotinib was well tolerated in this study with healthy volunteers. 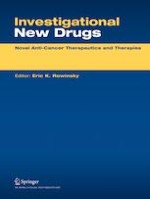 Design, synthesis and cytotoxicity of the antitumor agent 1-azabicycles for chemoresistant glioblastoma cells