Little is known about the work environmental risk factors for opioid use disorder (OUD) in working populations. The purpose of this study is to examine whether adverse physical and psychosocial working conditions are associated with OUD in a working population of the United States (US).

This study implies that adverse physical and psychosocial working conditions may be important risk factors for OUD in US working populations. Future longitudinal and mechanistic studies are urgently warranted. 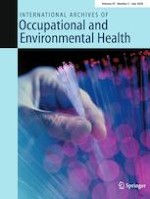 The longitudinal association between shift work and headache: results from the Danish PRISME cohort

Exposure to metal fumes and circulating miRNAs in Algerian welders