The purpose of this study was to compare the clinical outcomes of patients undergoing total hip arthroplasty (THA) who had been using narcotic medications prior to surgery to those who had not used them.

Fifty-four patients (62 hips) who had required opioid analgesia for hip pain in the three months prior to THA were compared to a matched group of opioid-naïve patients. Narcotic consumption was converted to a standardized morphine equivalent dose and compared between both groups of patients during their hospital stay, after six weeks, and at final follow-up. Other outcome measures included clinical outcome scores and the proportion of patients remaining on narcotic pain medication at final follow-up.

The narcotic group required significantly higher total daily opioid doses as inpatients had a longer hospital stay and a higher proportion of patients who remained on opioids at six weeks and at final follow-up. Of the patients who were taking opioids pre-operatively, 81 % were able to wean off opioids at final follow-up. At a mean post-operative follow-up of 58 months (range, 24–258 months), Harris hip scores were lower in the narcotic group, with a mean of 84 compared to 91 points in the matching group. However, in both cohorts, there were significant improvements in Harris hip scores compared to pre-operative outcomes. 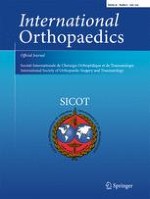