Opportunistic breast cancer screening by mammography in Japan for women in their 40s at our preventive medical center: harm or benefit? | springermedizin.de Skip to main content
SUCHE MENÜ 1 2 3 4

After recent revised grading by the US Preventive Services Task Force of mammography (MMG) recommendations for women in their 40s, it is urgent to collect data on the benefits and harm of MMG screenings in Japan. In this paper, we study the actual status and effectiveness of opportunistic breast cancer screening by MMG for women in their 40s.

From January to December 2008, the total number of opportunistic breast cancer screenings by MMG at our institute was 12823. Of them, 398 (3.1 %) who were diagnosed as category 3 or more on MMG required further exams. The data were compared between two groups (women in their 40s, women aged 50 and older). Recall rate, detection rate of breast cancers, and implementation rate of further exams were evaluated.

The results from our single institute revealed that opportunistic breast cancer screening by MMG for women in their 40s shows higher net benefits than for women aged 50 and older.

In November 2009, the US Preventive Services Task Force (USPSTF) changed its recommendation for MMG for women in their 40s from grade B (they had recommended screening once or twice a year for all women aged 40 and over) to grade C (the decision to undergo screening from ages 40 to 49 should be an individual one that takes into account the benefits and harm of MMG) [1]. This revision was made because MMG screening brings benefits women in their 40s to reduce 15 % mortality rate [2, 3]. However, such screening also harms (e.g., invasive biopsy or exposure to radiation as a result of further examination, a cause of anxiety, limiting of medical resources, and cost) and is considered to have little net benefit [4‐9].
Accordingly, in May 2010 the Japan Association of Breast Cancer Screening (JABCS) indicated its view that “this revision of the USPSTF’s recommendations is generally appropriate in light of the scientific evidence. However, it should not be directly introduced in Japan, since the data was based on those from the USA. Breast cancer peak age in Asia may be different from that in the USA and European countries [10]. Japanese recommendations should be revised based on data specific to Japan, but Japan-specific data on harm are lacking and such data must be promptly assembled” [11]. Japan has various systems of breast cancer screening that include population-based screening as well as opportunistic screening through employer-provided medical checkups and complete medical examinations. The state of opportunistic breast cancer screening must be ascertained in order to look at data from Japan [12]. Thus, we study the actual status and effectiveness of opportunistic breast cancer screening by MMG for women in their 40s at our institute.
Anzeige

Opportunistic breast cancer screening by MMG was performed for a total of 12823 women from January to December 2008 at our institute, specifically 4165 for initial screenings and 8658 for subsequent screenings. Every MMG was classified into five categories according to guidelines for MMG [13]. Of them, 398 (3.1 %) who were diagnosed as category 3 or more on MMG required further exams. The data were compared between two groups (women in their 40s, women aged 50 and older).

JABCS has indicated that Japan cannot perfunctorily adopt the revised recommendations of the USPSTF [11]. In Japan, numerous studies have previously reported on the benefits of screening but data on its harm are lacking and must be promptly assembled. In addition, screening systems in Japan include population-based screening as well as opportunistic screening in the form of employer-provided medical checkups and complete medical examinations. The state of these types of screening must be ascertained [12]. Thus, the data on opportunistic screening at our facility were compared to population-based screening in the USA and Japan, as indicated in the literature which described screening MMG for women aged 40–49.
The results of our study were converted to a population of 1000 women undergoing screening MMG for comparison with figures from the BCSC [14, 15] and JABCS [12]. The data regarding benefits and harm of screening MMG for women in their 40s are shown in Table 6 [12, 14‐16].
Table 6
Screening results for women aged 40–49 years
BCSC [12‐14], JABCS: 5 prefectures [11]
aAdditional imaging was defined as the number using US according to the JABCS
The results of our study indicated that screening MMG caused less harm in terms of both the number of false positives and the number of women who underwent an additional imaging study. This number of women who underwent an additional imaging study was defined as the number of women who underwent an US in conjunction with Japanese data on population-based screening. An additional biopsy, which did not include FNA, was the same as that of the USA. There were few differences in the number of false positives and number of women who underwent an additional biopsy, so women who are recalled for further examination at this facility are quite likely to undergo a biopsy. An improved rate of breast cancer detection is a benefit of screening MMG. The cancer detection rate in our study was higher than population-based screening in the USA and Japan.
As mentioned earlier, the number of false positives required to detect one true cancer patient was compared (bottom of Table 3). During population-based screening in the USA and Japan, more women in their 40s were false positives than women aged 50 and over, which was the opposite to our results.
Our results showed that opportunistic MMG screenings have positive net benefits. They are highly beneficial and less harmful than population-based screening in Japan or in the USA. There may be several reasons for these results. First, women in their 40s have higher breast cancer prevalence in Japan than in the USA. In the USA, breast cancer prevalence consistently rises starting in 40s and continues to late 70s. In Japan, prevalence peaks twice, once in late 40s and another in early 60s [10, 11, 17].
The second reason for these results may be due to selection bias because the subjects in this study underwent opportunistic screening. The participants of opportunistic screenings at our institute may be likely to have high health awareness and have a family history of cancer, compared to those in general population-based screenings. Moreover, selection bias may have accompanied any US screening that was conducted on the same day. This study only indicated MMG results, but subjects were also allowed to undergo US screening on the same day if they wished. Thus, young women and women with dense breast tissue on a previous MMG opted to undergo US screening. The population of this study may have been women who were diagnosed more easily by MMG.
Anzeige
In addition, there may be instances when local residents are screened and current images cannot be compared to previous images. Women who were seen numerous times by our facility had their current images compared to their previous images. Because examinees undergoing subsequent screenings accounted for about two-thirds of all participants at our opportunistic screening, we were able to compare current images with previous images. Thus, the proportion of cases requiring more detailed examination was lower, likely resulting in a higher rate of PPV.
Currently, an individual with a ranking of A, B, or better as stipulated by the Central Committee on Quality Control of Mammographic Screening is certified to perform and read mammograms in Japan [18]. At our facility, MMG is performed by five certified technologists and physicians with A or As ranking checked all exams. This may be the third reason for the optimal results of this study.
Nevertheless, this study had several limitations. First, the results for women who were recalled were not always ascertained, as reflected by the 22.9 % of women (38/166) who were recalled but whose subsequent status was unknown (i.e., whether or not they underwent further testing). A follow-up framework must be crafted in order to reduce the rate of women who are recalled but whose subsequent status is unknown, and this is a project for future study. A second limitation is that false negatives were not fully ascertained. However, this would require checking with the cancer registry and is a given limitation of opportunistic screening.
Encapsulating the results of screening local residents of five Japanese prefectures, the view of the JABCS is that Japan cannot perfunctorily adopt the revised recommendations of the USPSTF. Results of this study are only from one institute, but they indicate a greater net benefit for opportunistic MMG screening of women in their 40s compared to such screening of women aged 50 and older, corroborating the view of the JABCS. Currently, JABCS is involved in a nationwide survey, the results of which should be presented in the future.
Anzeige

The results from our single institute revealed that opportunistic MMG screenings for women in their 40s show higher net benefits than for women aged 50 and older. 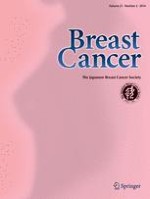