Colorectal cancer (CRC) is still the third leading cause of cancer-related death worldwide [ 1]. However, the incidence of CRC decreased at least 2 % per year between 1998 and 2010 [ 2]. The decreased incidence of CRC is strongly related to the identification of novel risk factors and improved clinical management. For example, screenings by colonoscopy contributed to an estimated overall decline in CRC incidence and mortality of 11 and 14 %, respectively, within a time period of 25 years [ 3]. Despite these improvements, it has been estimated that approximately 1,360,000 new CRC cases will be diagnosed worldwide, and the number of CRC-related deaths has been projected to be almost 700,000 [ 1].
CRC is divided into sporadic, familial or hereditary cases based on the etiology of the disease. In sporadic CRC cases, accounting for approximately 70–75 % of all CRC cases, environmental lifestyle risk factors, including obesity, smoking and alcohol consumption, may have contributed to the development of the CRC, but no heritable germline aberrations are expected to be involved [ 4]. In sharp contrast, heritable predisposing germline aberrations are expected or known to be involved in familial and hereditary CRC, respectively. Familial CRC, contributing to approximately 20 % of all the CRC cases, is characterized by a positive family history and an increased familial risk of CRC, but the causative, possibly multiple less penetrant, germline aberrations are undefined [ 5]. In contrast, in 5–10 % of all CRC cases referred to as hereditary CRC, a high-penetrant CRC predisposing germline aberration is observed. To date, several high-penetrant CRC predisposing syndromes have been identified and due to the heritability of the causative germline aberration, entire families are at an increased lifetime risk of CRC [ 5, 6].
Anzeige

LS is an autosomal dominantly inherited syndrome caused by monoallelic germline aberrations affecting one of the DNA mismatch repair (MMR) genes. Germline mutations in the MSH2 locus were the first identified genomic aberrations predisposing to LS [ 16]; thereafter, the predisposing role of germline aberrations in the DNA MMR genes MLH1 [ 17], MSH6 [ 18], and PMS2 [ 19] was established. In addition, a novel LS predisposing molecular mechanism has been identified. It has been demonstrated that germline deletions affecting the 3′ exon of EPCAM result in transcriptional read-through and induce epigenetic silencing of the downstream MSH2 locus by promoter hypermethylation [ 20].
The lifetime risk of CRC in LS patients is strongly associated with the causative gene/germline defect. The cumulative risk of CRC by the age of 70 years is higher in Lynch patients with pathogenic germline mutations in MSH2 (48–77 %), MLH1 (41–79 %) or deletions affecting the 3′ exon of EPCAM (69–75 %), compared to carriers of pathogenic germline mutations in MSH6 (12-50 %) or PMS2 (15–20 %) [ 21– 23]. In addition, LS patients are at an increased risk to develop extracolonic malignancies in the endometrium, ovaries, stomach, small intestines, urinary tract and sebaceous glands [ 6]. Similar to the risk of CRC, the cumulative risk to develop these extracolonic malignancies is associated with the causative gene/germline defect (reviewed in [ 24]).
The role of the DNA MMR pathway on the development of CRC in LS patients has been well established. In MMR-proficient cells, the DNA MMR proteins MLH1, MSH2, MSH6 and PMS2 can form different heterodimeric protein complexes. MMR proteins recognize and correct misincorporations, insertions and deletions introduced by DNA polymerase slippage. These replication errors are strongly associated with the low fidelity of DNA polymerases, especially in repetitive DNA sequences like microsatellites [ 25]. If, according to Knudson’s second-hit model [ 26], the remaining wild-type allele is somatically inactivated in LS patients, the DNA MMR capacity is lost. Mutations arise since these replication errors are not properly recognized and corrected anymore. This will lead to the development of CRC with microsatellite instability (MSI) [ 27]. This strong correlation between the development of MSI CRC and LS has been well established: virtually all CRC derived from LS patients have MSI. In addition, especially in CRC patients below the age of 50 years, MSI is used as a biomarker for the identification of LS patients [ 6, 28, 29].
Anzeige

Next to CRC derived from LS patients, MSI is encountered in approximately 15–20 % of the CRC derived from sporadic CRC patients [ 30, 31]. Therefore, the vast majority of all the MSI CRC are considered sporadic since only 2–3 % of all CRC come from LS patients with germline mutations in one of the DNA MMR genes [ 32]. Similar to CRC derived from LS patients [ 33, 34], these tumors have MSI and are mostly chromosomal stable [ 35].
Sporadic MSI CRC share histological features as mucinous differentiation and stromal inflammatory reactions with CRC derived from LS patients [ 36]. Similar to the improved prognosis for LS patients compared to sporadic CRC [ 37], a better prognosis is reported if sporadic CRC have MSI [ 38].
Since no germline aberrations affecting one of the DNA MMR genes are present in patients with sporadic MSI CRC, the MMR pathway is inactivated in a different manner compared to the previously discussed mechanism in LS patients. The most frequently observed molecular mechanism causing the MSI phenotype in sporadic CRC is the biallelic inactivation of MLH1 by hypermethylation of the promoter [ 39]. CRC with hypermethylation of MLH1 are frequently accompanied by the CpG island methylator phenotype. MLH1-hypermethylated CRC are, in line with an MMR defect, highly enriched for frameshift mutations in long mononucleotide repeats and hypermutated [ 40]. For a subset of the sporadic MSI CRC, two acquired somatic events explain the loss of MMR activity. In these cases, two somatic hits affecting both alleles of MLH1 or MSH2 are identified, which have caused the MSI phenotype in the CRC [ 41– 43]. In MSI CRC derived from both LS as well as sporadic cases, the somatic inactivation of the MMR machinery enables the accumulation of insertions and deletions in repetitive DNA sequences, which will eventually drive the development of MSI CRC.

As discussed above, the inactivation of the DNA MMR pathway is established differently in sporadic and LS CRC. Next to the CpG island methylator phenotype in sporadic MSI CRC, another somatic difference between sporadic and familial MSI CRC has been established. The activating p.V600E hotspot mutation in BRAF is strongly associated with MMR-deficient CRC [ 44, 45], but is only observed in sporadic MSI CRC and not in MSI CRC derived from LS patients [ 46]. Nevertheless, the somatic alterations driving tumorigenesis after the inactivation of the DNA MMR pathway appear to be comparable in sporadic and familial MSI CRC. After the loss of MMR activity, somatic misincorporations, insertions and deletions are rapidly accumulated. It has been established that, on average, approximately 1300 somatic base substitutions are acquired in MSI CRC derived from LS patients, whereas only 190 somatic base substitutions are present in microsatellite stable (MSS) tumors [ 47]. Similarly, sporadic MSI CRC has a significantly increased number of base substitutions compared to MSS CRC. In addition to these base substitutions, large numbers of somatic insertions and deletions are observed in MSI CRC. A subset of these insertions and deletions can affect coding regions of the genome, potentially resulting in frameshifts in the open reading frame of genes. These frameshift mutations can also occur in specific tumor suppressor genes which are susceptible for these mutations since they harbor repetitive DNA sequences in their coding regions [ 48]. For example, frameshift mutations are frequently observed in the mononucleotide repeats of tumor suppressor genes APC [ 49], BAX [ 50], and TGFBR2 [ 51] in MSI CRC. These somatic frameshifts in APC, BAX and TGFBR2 are observed in approximately 70, 50 and 90 % of the MSI CRC, and loss of the functional expression of the encoded tumor suppressor proteins can drive tumorigenesis [ 49– 51].
In recent years it has been appreciated that frameshift mutations vary between patients and tumors. Within each tumor new self-antigens, the so-called neoantigens, accumulate. Indeed, an accumulation of approximately 40 unique epitopes for all MHC class I molecules per individual colorectal cancer has been observed [ 52]. They arise as a by-product when frameshifted neoproteins are degraded and derived peptides are presented. Neoantigens are therefore individual, immunogenic peptides, and were shown to contribute to a better survival of patients while being exploited as targets for immunotherapy (as reviewed in [ 53]). Frameshift mutations, however, do not always lead to neoantigen production. Nonsense-mediated mRNA decay, the surveillance pathway to reduce errors in gene expression by mRNA transcripts, eliminates aberrant mRNAs that encode incomplete polypeptides [ 54].

All authors declare that they have no competing financial interests.
Open AccessThis article is distributed under the terms of the Creative Commons Attribution 4.0 International License ( http://​creativecommons.​org/​licenses/​by/​4.​0/​), which permits unrestricted use, distribution, and reproduction in any medium, provided you give appropriate credit to the original author(s) and the source, provide a link to the Creative Commons license, and indicate if changes were made. 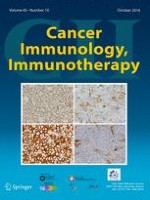 Topical treatment of melanoma metastases with imiquimod, plus administration of a cancer vaccine, promotes immune signatures in the metastases