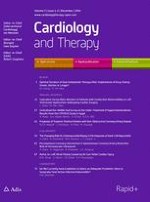 Centralized Pan-Middle East Survey on the Under-Treatment of Hypercholesterolemia: Results from the CEPHEUS Study in Egypt