Optimal implantable cardioverter–defibrillator (ICD) programming can reduce the incidence of inappropriate shock therapy and improve prognosis in patients with an ICD. Only after results from randomized trials became available was the “safety first” feeling overcome that mandated early shock therapy, waived the use of antitachycardia pacing and forced shock therapy after a time of 30 s expired, even if tachycardia discriminators would have withheld the therapy. The strong evidence to limit ICD therapy to longer ventricular tachycardia (VT) should not result in individually dangerous ICD programming, particularly in patients with a high risk of slow VT (known monomorphic VT, post VT ablation, during treatment with amiodarone, very dilated left ventricle). Monitoring zones may aid to detect unexpected slow VT and to explain symptoms such as presyncope without exposing the patient to an unnecessary risk of inappropriate therapy. This review summarizes our current knowledge on optimal ICD programming and explains exactly how we should program device parameters in practice in single- or dual-chamber ICDs by different manufacturers and in different groups of patients. 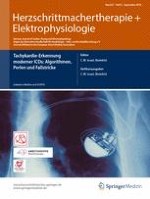