To explore the best schedule of oral cryotherapy for the prevention of oral mucositis in recipients of myeloablative hematopoietic stem cell transplantation (HSCT).

A prospective randomized study was conducted to recruit allogeneic HSCT recipients, who were then randomly allocated into four arms to accept the following: oral cryotherapy during the whole course (arm A) or second half of the course (arm B) of cytotoxic agents administration, regular oral cryotherapy twice a day (arm C), or conventional oral care without cryotherapy (arm D). Status of oral mucositis was daily assessed from the first day of conditioning to the 15th day post-HSCT. A myeloablative conditioning regimen was used which was composed of busulfan, cyclophosphamide, and cytarabine.

Totally 160 cases were consecutively enrolled in this study, and 145 cases were eligible for oral mucositis assessment. Both arm A and arm B were associated with a lower incidence and short duration of severe mucositis (≥ grade 3), although no statistical difference was found between these two groups (p = 0.463, p = 0.678). The highest incidence of severe mucositis was observed in arm C. Recovery of mucositis also had a significant diversity among the 4 arms (F = 4.133, p = 0.008).

Risk and outcome of severe oral mucositis could be ameliorated by oral cryotherapy during the administration of cytotoxic agents for allogeneic HSCT patients receiving non-radiation myeloablative conditioning regimen, and a half-course schedule could acquire a comparable efficacy compared with the whole-course schedule. 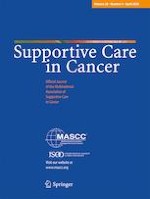 Correction to: Could the impact of photobiomodulation on tumor response to radiation be effected by tumor heterogeneity?

The effects of dietary advice on malnutrition in Cancer patients: a systematic review and meta-analysis

“All boats will rise”: Physicians’ perspectives on multidisciplinary lung cancer care in a community-based hospital setting