The interaction between the immune and skeletal systems has long been acknowledged, but investigation into rheumatoid arthritis (RA) as well as the various bone phenotypes found in immunocompromised gene-deficient mice has highlighted the importance of the dynamic interplay between the two systems. This has led to the recent emergence and subsequent rapid evolution of the field of osteoimmunology.

Bone Destruction with Arthritis as a RANKL Disease

In addition to cellular interactions via cytokines, the immune and skeletal systems share various molecules, including transcription factors, signaling molecules, and membrane receptors.

The scope of osteoimmunology has grown to encompass a wide range of molecular and cellular interactions, the elucidation of which will provide a scientific basis for future therapeutic approaches to diseases of both the immune and skeletal systems.
Anzeige 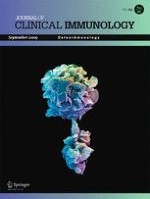 Clinico-immunologic Study on Immunotherapy with Mixed and Single Insect Allergens

Differential Transcriptional Expression of PPARα, PPARγ1, and PPARγ2 in the Peritoneal Macrophages and T-cell Subsets of Non-obese Diabetic Mice