Several non-small cell lung cancer (NSCLC) cases of successful rechallenge with epidermal growth factor receptor (EGFR) tyrosine kinase inhibitor (TKI) after recovery from gefitinib or erlotinib-induced interstitial lung disease (ILD) have been reported, but it is not clear whether the rechallenge affects the outcome.

We retrospectively evaluated the difference in the outcome between advanced NCLC patients with active EGFR mutations who received EGFR-TKI rechallenge after recovery from EGFR-TKI-induced ILD and those who did not.

EGFR-TKI rechallenge with concurrent prednisolone therapy might be salvage therapy in advanced NSCLC patients with active EGFR mutations after recovery from EGFR-TKI-induced ILD. 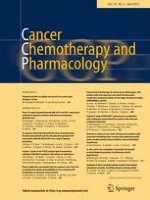 Inhibition of GOT1 sensitizes colorectal cancer cells to 5-fluorouracil