The objective was to investigate the outcome of stress urinary incontinence (SUI) and overactive bladder (OAB) symptoms in women with urodynamic stress incontinence (USI) after transobturator sling procedures (TOTs).

We evaluated 109 consecutive patients with USI, who had undergone TOT in a tertiary hospital between 2012 and 2014. All patients received evaluations, including structured urogynecological questionnaires and pelvic organ prolapse quantification examination before, and 3 and 12 months after surgery. One-hour pad test and urodynamic testing were performed before and 3–6 months postoperatively. Patient demographics, lower urinary tract symptoms, and urodynamic results were analyzed between pure USI and USI with OAB symptoms.

Persistent SUI occurred in 8 patients at 3 months (7.3 %) and 7 patients at 12 months (6.4 %) postoperatively. The most common OAB symptom was frequency (54.1 %), followed by urgency urinary incontinence (52.3 %), urinary urgency (42.2 %), and nocturia (33 %). Most of these OAB symptoms were resolved at the 3-month and 12-month follow-ups both in patients treated with TOT only and in those treated with TOT combined with other pelvic surgeries. There was no significant difference in the preoperative urodynamic changes between patients with pure USI and USI without OAB groups. However, postoperative urodynamic results showed a significant decrease in the maximal urethral closure pressure in the group of patients with USI and OAB symptoms, but no significant urodynamic changes in the group with pure USI.

Coexistent OAB symptoms are common in women who were diagnosed with USI and most of these symptoms may resolve 3 and 12 months after TOT. 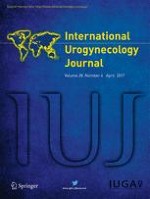 Impact of subsequent birth and delivery mode for women with previous OASIS: systematic review and meta-analysis

Bladder stones in vesicovaginal fistula: is concurrent repair an option? Experience with 87 patients

Prevalence and impact of pelvic floor dysfunction in an adult cystic fibrosis population: a questionnaire survey