STAMPEDE arm H demonstrated a survival benefit for newly diagnosed prostate cancer (PCa) patients with low metastatic burden (LMB) who additionally received radiotherapy (RT) to the primary. However, it is unknown if radical prostatectomy (RP) may achieve equivalent results, since existing studies did neither include the same selection criteria nor examine comparable endpoints as STAMPEDE arm H.

We retrospectively analysed 78 RP patients (2008–2018) with LMB (< 4 bone metastases) as defined in the subgroup analysis of STAMPEDE arm H. Like in STAMPEDE, overall (OS), metastatic progression-free (MPFS), and PCa-specific (CSS) survival at 3 years, as well as complication and continence rates were assessed.

When comparing our RP cohort with the results of STAMPEDE arm H with LMB who received RT, no major disadvantage in OS and CSS may be expected. Since local treatment in patients with LMB might now be considered the new standard, RP should be further explored as local treatment option in these patients.
Anzeige 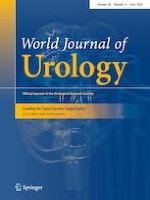 En-bloc resection of non-muscle invasive bladder cancer: what must be answered in the future?

Narrow-band imaging assisted cystoscopy in the follow-up of patients with transitional cell carcinoma of the bladder: a randomized study in comparison with white light cystoscopy

Comparison of intra- and postoperative analgesia and pain perception in robot-assisted vs. open radical prostatectomy

Surgical safety in radical cystectomy: the anesthetist's point of view—how to make a safe procedure safer