The NSQIP esophagectomy-targeted database during 2-year period was used. Only patients who underwent elective TTE for oncologic indications were included. Patients were matched per a propensity score for the likelihood of receiving OTTE versus MITTE.

Overall, 2098 esophagectomies were reported; 576 met the inclusion criteria. A total of 161 purely OTTE patients were matched 1:1 with patients who received purely MITTE. OTTE was associated with higher reported rates of abdominal and mediastinal lymphadenectomies (LAD) (26.7% vs. 3.1% and 38.5% vs. 16.1%, respectively; p < 0.001) and had shorter mean operative time (329 vs. 414 min; p < 0.001). However, OTTE patients had higher rates of wound infection (7.5% vs. 1.9%), longer median hospitalization (10 vs. 8 days), more non-home discharges (18.0 vs. 8.1%), and a tendency toward higher rates of postoperative transfusion (13.0% vs. 6.8%; p = 0.092). The overall complications rate was higher in OTTE (46.0% vs. 33.5%; p = 0.028). No difference was noted in the rates of anastomotic leak, negative margins, reoperation, readmission, or mortality. Laparoscopic versus robotic approaches were uniformly comparable, except for higher rates of reported abdominal LAD in laparoscopic and higher rates of reported mediastinal LAD in robotic approach.

MITTE is comparable to OTTE for oncologic indications in immediate postoperative outcomes. A concern is raised regarding the oncologic outcome given the lower reported rates of lymphadenectomies. Comparison of long-term outcomes is essential to address this concern.
Anzeige 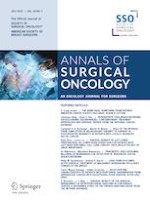 Longer Intervals from Neoadjuvant Therapy to Rectal Cancer Surgery: The Clock is Ticking…

Salvage Surgery for Jejunal Necrosis After a Free Jejunal Transfer

The Best Approach to Esophagectomy: Do We Know Yet?