To study the long-term outcomes of stent-change therapy for malignancy-related ureteral obstruction in terms of renal function outcomes.

We retrospectively reviewed 87 consecutive patients who underwent bilateral ureteral stenting for malignant bilateral ureteral obstruction. Predictive value of clinical variables, such as age, sex, comorbidities, renal function at time of stenting, and securing of the dominant functional kidney or both with early percutaneous nephrostomy (PCN) conversion on renal function preservation, were analyzed.

The mean serum Cr level was 3.3 mg/dl at the time of bilateral stenting, which significantly decreased to 1.6 mg/dl at 6 months post-stenting and progressively deteriorated to 2.3 mg/dl at 3 years post-stenting. Chronic kidney disease (CKD) stage 4 or 5 developed in 18.3 % of patients at 6 months post-stenting and in 57.2 % at 3 years post-stenting. During the follow-up period, 12 patients (13.8 %) had PCN conversion. Patients who had early PCN conversion before progression to CKD 4 or more tended to show a better renal function outcome than patients with CKD 4 or more who had late PCN conversion or no conversion. Multivariate analysis showed that an age older than 55 years, diabetes, and an eGFR <60 before obstructive symptoms or signs were significant predictive factors for the development of CKD stage 4 or more.

To preserve renal function, patients with bilateral malignant ureteral obstruction, especially those aged 55 or more or with diabetes or poor baseline renal function, should be considered for early PCN conversion in the dominant functional kidney or both. 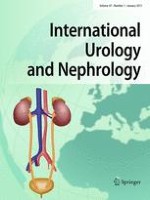 Can a four-session biofeedback regimen be used effectively for treating children with dysfunctional voiding?