Over- and under-prophylaxis for chemotherapy-induced (febrile) neutropenia relative to evidence-based guidelines is associated with differences in outcomes: findings from the MONITOR-GCSF study | springermedizin.de Skip to main content
TOOLBAR 1 2 3 4
SUCHE MENÜ 1 2 3 4

In the MONITOR-GCSF study of chemotherapy-induced (febrile) neutropenia with biosimilar filgrastim, 56.6% of patients were prophylacted according to amended EORTC guidelines, but 17.4% were prophylacted below and 26.0% above guideline recommendations.

MONITOR-GCSF is a prospective, observational study of 1447 evaluable patients from 140 cancers centers in 12 European countries treated with myelosuppressive chemotherapy for up to 6 cycles receiving biosimilar GCSF prophylaxis. Patients were classified as under-, correctly-, or over-prophylacted with GCSF relative to guideline recommendations based on their chemotherapy risk, individual risk factors, and type of GCSF prophylaxis (primary versus secondary).

Differences between under- (17.4%), correctly- (56.6%), or over-prophylacted (26.0%) groups were found in terms of patient risk factors (age, performance status, history of FN, comorbid conditions) as well as prophylaxis patterns (type of prophylaxis, day of GCSF initiation, and GCSF duration). Rates of chemotherapy-induced neutropenia (CIN) (all grades), FN, and CIN-related hospitalizations were consistently lower in over-prophylacted patients relative to under- and correctly-prophylacted patients. No differences were observed between under- and correctly-prophylacted patients except for CIN/FN-related chemotherapy disturbances. No GCSF safety differences were found between groups (except for headaches).

The real-world evidence provided by the MONITOR-GCSF study indicates that providing GCSF support may yield better CIN, FN, and CIN/FN-related hospitalization outcomes if patients are prophylacted at levels above guideline recommendations. Patients who are under-prophylacted are at higher risk for disturbances to their chemotherapy regimens. Our findings support the guideline recommendation that CIN/FN risk be assessed at the beginning of each chemotherapy cycle. 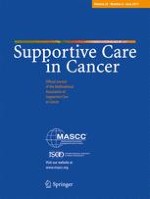 Nothing left to chance? The impact of locus of control on physical and mental quality of life in terminal cancer patients