Li-Fraumeni and Li-Fraumeni-like syndrome (LFS/LFL) are clinically heterogeneous cancer predisposition syndromes characterized by diagnosis of early-onset and often multiple cancers with variable tumor patterns and incomplete penetrance. To date, the genetic modifiers described in LFS/LFL have been shown to map to either TP53 or its main negative regulator, MDM2. Additionally, all studies were focused on families with different TP53 germline mutations. Hence, in this study we explored the effect of the most studied polymorphisms of p53 pathway genes on clinical manifestations of individuals carrying the founder TP53 mutation R337H (n = 136) and controls (n = 186). Cancer-affected carriers had been diagnosed either with adrenocortical carcinoma (ACC, n = 29) or breast cancer (BC, n = 43). Allelic discrimation using TaqMan assay was used for genotyping MDM2 SNP 309 (rs2279744) as well as MDM4 (rs1563828) and USP7 (rs1529916) polymorphisms. We found significantly higher MDM2 SNP 309 GG genotype and G allele frequencies in the LFS cohort than in controls. Furthermore, median age at first diagnosis was earlier in MDM2 SNP309 GG carriers when compared to other genotypes for both cancers (ACC: age 1 vs. 2 years; BC: age 35 vs. 43 years, respectively), although not statistically different. The allelic and genotypic frequencies for all SNPs did not differ between cancer affected and unaffected carriers, neither between patients with ACC or BC. In conclusion, our results suggest that MDM2 SNP 309 may contribute to the LFL phenotype and also to an earlier age at diagnosis of ACC and BC cancer in carriers of the R337H founder mutation. 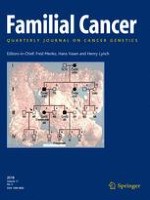