Differentiation of salivary gland acinic cell carcinoma from mucoepidermoid carcinoma can be diagnostically challenging as both may have prominent mucin production. P63 is a p53 homologue required for limb and epidermal morphogenesis. It is expressed in basal and myoepithelial cells of normal salivary gland tissues. In this immunohistochemical study, we examined the expression of p63 in salivary gland acinic cell and mucoepidermoid carcinomas (MEC) and its use in differentiating these two entities. A search was performed and appropriate cases were selected from Lifespan Hospital System archives as well as the consult archives of one author (DRG). 31 salivary gland acinic cell carcinomas (ACC) and 24 MEC were examined for p63 expression by immunohistochemistry. The nuclear immunoreactivity was examined by both authors and was graded semi-quantitatively with negative being less than 10 % of cells staining. Positive staining was graded as follows: 10–25 % of tumor cells staining was weakly positive, 26–75 % of tumor cells staining was moderately positive, and 76–100 % of tumor cells staining was strongly positive. Negative nuclear staining of the tumor cells was seen in 30/31 (96 %) of salivary gland ACC while 1/31 (3 %) showed diffuse nuclear staining of the tumor cells. This latter case was later reclassified as mammary analogue secretory carcinoma following confirmatory molecular testing for the ETV6-NTRK3 fusion gene. Strong positive nuclear staining of the tumor cells was seen in 24 (100 %) of salivary gland MEC cases. P63 is an immunohistochemical stain that can potentially aid in differentiating unusual ACC with prominent mucin production from MEC of the salivary gland. According to this study, acinic cell carcinoma is always negative for p63 immunoreactivity while mucoepidermoid carcinoma is always positive. 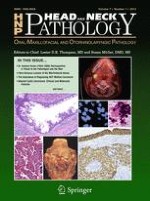 Dr. Andrew Huvos (1934–2006) Retrospective: A Tribute to the Pathologist and the Man