RH conceived of the study, supervised the data collection and wrote the manuscript. MD carried out the data collection. RH, RHastings, MD and JN all developed the Directory itself, making amendments in various iterations. All authors participated in development of the final manuscript and have seen and approved the submitted draft.

The need of children for palliative care is well recognised [ 1– 9] but difficult to define. It is defined by the needs of an individual child and family when cure is no longer possible, rather than by age or organ system. The Royal College of Paediatrics and Child Health (RCPCH), working with the Association for Children’s Palliative Care (ACT) in 1997, defined the concept of life-limiting condition [ 6] through a series of archetype descriptions (Table  1), but did not attempt to name specific diagnoses except as exemplars. If, however, children are to have the same access to specialist palliative interventions as adults currently enjoy, service developers must engage commissioners. That requires a precise understanding of the numbers of children who need services, which in turn requires specific diagnostic criteria.
Table 1
ACT/RCPCH Categories[ 6]
We developed a Directory of life-limiting conditions by mapping the four ACT/RCPCH archetypes onto the diagnoses of actual patients admitted to hospice or palliative care services in the UK. We then piloted the Directory by using it to interrogate death certificate data for children in Wales over a five-year period.
Anzeige
We describe development of the Directory and, in the light of results of the pilot study, consider some of its current limitations as well as the wider applications in taking forward service and research developments in children’s palliative care. The aim of this study was to develop and pilot a tool that can largely define the group of conditions that are life-limiting in childhood and facilitate secondary analysis of epidemiological data in this under-researched field.

Diagnoses were obtained from patients under the care of five children’s hospices that were using a standardised data collection tool developed by Chase Hospice (Esplen, personal communication 2010), and the Welsh specialist paediatric palliative medicine service based at the Children’s Hospital in Cardiff. All had been considered to be ‘life-limiting’ both by the referring clinician and the clinician accepting the referral.

The list was edited in three ways.
Removal of duplicate diagnoses.
Anzeige
Duplicates occurred when two or more terms were used to describe the same condition (e.g., trisomy 13 and Patau’s syndrome).
Removal of non-diagnoses.
This included terms that had led to referral, but were not life limiting conditions in themselves. They included modes of death (e.g., apnoea), treatments for the life limiting diagnosis (e.g., tracheostomy) and conditions that were incidental to the life-limiting diagnosis (e.g., anaemia).
Removal of diagnoses that were not life-limiting.
For the purposes of this study, a life-limiting diagnosis was considered to be any condition whose trajectory could be described by one or more of the ACT/RCPCH archetypes (Table  1).

ICD10 codes were assigned to each diagnosis

A diagnostic label and code from the International Classification of Disease (ICD10) was assigned by the investigators to each diagnosis on the list (apps.who.int/classifications/apps/icd/icd10online/).

The draft Directory was used to interrogate a database comprising aggregated anonymous death certificate data for all deaths in Wales between 0 and 19 years between 2002 and 2007, obtained from Public Health Wales Observatory [ 10]. LLC that mapped onto one or more of the ACT/RCPCH archetypes but did not already appear in the draft Directory, were added to the draft.
This was a secondary analysis of data that were anonymous or already in the public domain that formed part of the My Choices project. Ethical approval for the project was obtained from the Betsi Cadwaldr NHS Research Ethics Committee.
Anzeige

1590 diagnoses from children’s hospices and 105 from specialist palliative medicine were combined. 1319 diagnoses were removed (see Methods section). All ICD10 chapter headings were represented by at least one condition, showing the range of conditions that can limit life in children.

The authors have compiled a ‘Directory’ of ICD10 diagnoses, drawing on admissions to children’s hospices on the one hand, and referrals to specialist paediatric palliative medicine on the other.
A pilot study of the Directory to analyse death certificate data showed that it was easy to use and allowed immediate secondary analysis of an established database. The study showed that around half of all childhood deaths in the study period were from LLC, thje majority of LLC are non-malignant, and that the range of LLC causing death in the neonatal period was markedly narrower than outside it.
By defining a list of precise ICD10 codes that map onto ACT/RCPCH criteria, for the first time the Directory allows analysis of existing clinical databases, paving the way for rapid establishment of prevalence data that would otherwise have been impractically slow.
No list of LLC based on disease label can ever be exhaustive. As new diagnoses become apparent, expansion will be important and should be the basis for further studies, which should also attach Read and ACT/RCPCH categories. While it will therefore continue to need refinement, the Directory is a key tool for rational service development in children’s palliative care.

The authors would like to thank Ms. Sonjia Ezergailis, Research Nurse at Children’s Hospice UK (now Together for Short Lives) who gathered diagnostic data from the children’s hospices, and all the data managers who participated. This project was part funded by Welsh Office of Research and Development (WORD), grant number ReF06/2/237.
This article is published under license to BioMed Central Ltd. This is an open access article distributed under the terms of the Creative Commons Attribution License ( http://​creativecommons.​org/​licenses/​by/​2.​0), which permits unrestricted use, distribution, and reproduction in any medium, provided the original work is properly cited. 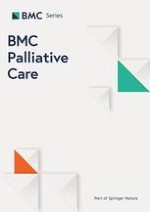 Determinants of place of death: a population-based retrospective cohort study

What is the extent of potentially avoidable admissions amongst hospital inpatients with palliative care needs?

Place of death in haematological malignancy: variations by disease sub-type and time from diagnosis to death