We report an extremely rare case of a pancake kidney with a single ureter. During the medicolegal autopsy on the body of a traffic accident victim, the kidneys were not located in the abdomen. The anterior surfaces of both kidneys were completely fused in the pelvic cavity, and the kidney was shaped like a pancake. This pancake kidney had accessory renal arteries around it and one renal vein from each kidney. The left renal vein was much smaller in diameter than the right one. There were two major calyces, one each from each kidney. The major calyces joined to form a single renal pelvis from both the kidneys, which continued as a single ureter. The renal pelvis and ureter lay posterior to the pancake kidney. Urologists and pelvic surgeons should be aware of the variant anatomy of the pancake kidney, particularly concerning its vasculature, to prevent unexpected catastrophic bleeding. If the kidneys are not located in the abdominal cavity, the autopsy surgeon must consider the possibility of its presence in the pelvic cavity. This could be especially important during medicolegal investigations into allegations of missing kidneys and unlawful kidney transplantations. 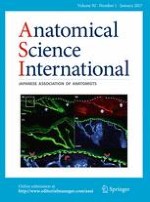 Tissue- and cell-specific localization of galectins, β-galactose-binding animal lectins, and their potential functions in health and disease

Renaissance of morphological studies: the examination of functional structures in living animal organs using the in vivo cryotechnique