Tumor-to-tumor metastasis is a relatively uncommon entity, whereby the so-called ‘recipient’ tumor is involved by another biologically unrelated ‘donor’ tumor. Intracranially, meningioma (WHO grade 1) is the most common recipient tumor, while breast and lung cancers are the most common donor tumors. We present an unusual case of intracranial tumor-to-tumor metastasis involving papillary thyroid carcinoma (PTC) believed to have metastasized to an anaplastic meningioma (WHO grade 3). The patient is a 64-year-old female with a history of PTC, whose neuroimaging, performed as part of her staging workup, revealed a right parietal scalp lesion. The lesion was resected to reveal metastatic PTC with spindle cell component believed to represent sarcomatoid differentiation. Follow-up neuroimaging 2 months later revealed regrowth of the lesion under the previous craniotomy site. PET scan showed increased uptake in this area consistent with metastasis. Resection of this lesion revealed primarily features of an anaplastic meningioma. The combination of pathologic findings from both resections in conjunction with findings from the PET scan led to the suggestion that the PTC had metastasized into the anaplastic meningioma. To the authors’ knowledge, this is the first example in the literature of a donor tumor metastasizing to a high-grade recipient tumor. 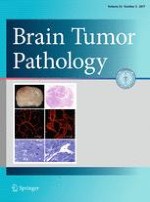 Hemorrhagic ganglioglioma of the third ventricle with atypical pathological findings

Prevalence and clinicopathological features of H3.3 G34-mutant high-grade gliomas: a retrospective study of 411 consecutive glioma cases in a single institution