Springer Nature remains neutral with regard to jurisdictional claims in published maps and institutional affiliations.
A 64-year-old female underwent laparoscopic nephrectomy for a kidney carcinoma. Amid the operation, the end-tidal carbon dioxide dropped from 39 to 22 mmHg. The expected wake at the end of the procedure did not achieve. The magnetic resonance imaging demonstrated diffuse lesions with restricted diffusion localized in the intracerebral parenchyma (Fig. 1). Paradoxical carbon dioxide embolism was diagnosed. No signs of right-to-left shunting were detected by transesophageal echocardiography. The patient was given Rivaroxaban for anticoagulant therapy. The patient remained in a coma 20 days before she recovered. During the hospitalization, the patient developed acute appendicitis and lung infection. After 60 days, the patient was discharged from the hospital, but there were some abnormalities in cognitive function, balance dysfunction, swallowing dysfunction, speech disorder, normal muscle strength of the limbs, and grade 4 muscle strength of the right lower limb.
×
Cerebral infarction resulting from paradoxical carbon dioxide embolism is a rare complication of laparoscopic surgery. In this case, the possible pathophysiology may be that the potential right-to-left shunt opened during the operation.
Anzeige

The authors have no conflict of interests to declare.

The patient’s family provided consent for the publication of the images.
Open AccessThis article is licensed under a Creative Commons Attribution-NonCommercial 4.0 International License, which permits any non-commercial use, sharing, adaptation, distribution and reproduction in any medium or format, as long as you give appropriate credit to the original author(s) and the source, provide a link to the Creative Commons licence, and indicate if changes were made. The images or other third party material in this article are included in the article's Creative Commons licence, unless indicated otherwise in a credit line to the material. If material is not included in the article's Creative Commons licence and your intended use is not permitted by statutory regulation or exceeds the permitted use, you will need to obtain permission directly from the copyright holder. To view a copy of this licence, visit http://​creativecommons.​org/​licenses/​by-nc/​4.​0/​. 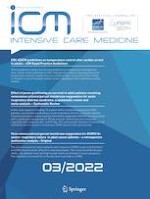 Pick your prior: scepticism about sceptical prior beliefs

Epinephrine versus norepinephrine in cardiac arrest patients with post-resuscitation shock