Hyperparathyroidism (HPT) is a state of overproduction of parathyroid hormone (PTH) due to over activity of one or more of the parathyroid glands [ 1]. Secondary HPT (sHPT) frequently complicates chronic kidney disease (CKD). CKD causes phosphate retention, hypovitaminosis D [1,25-(OH) 2-D], and hypocalcemia, leading to stimulation of the parathyroid glands and increased PTH production. Secondary HPT occurs in 25–30% of patients with end-stage renal disease (ESRD) and is associated with severe bone mineral disease [ 2]. Importantly, sHPT is also associated with increased cardiovascular morbidity [ 2] and mortality [ 3, 4]. The first line of treatment of sHPT used to consist of calcium and vitamin D supplementation followed by either medical therapy using calcimimetics [ 5] or surgical treatment by parathyroidectomy (PTx) [ 6]. For dialysis patients requiring PTH-lowering therapy, the current recommendation is to treat with calcimimetics, calcitriol or vitamin D analogs, or a combination of these therapies [ 7].
Secondary HPT can be corrected by a successful kidney transplantation (KT) [ 8]. Nevertheless, 17–50% of patients who receive a kidney transplant remain in a state of HPT 1 year after KT [ 9‐ 11]. This is referred to as tertiary or post-renal transplantation HPT (tHPT), which is characterized by excessive and autonomous production and excretion of PTH [ 8, 12]. In general, the PTH concentration rapidly declines within the first 3 months after KT and then continues to decline more gradually over the course of the next 9 months. One year after transplantation, PTH concentrations are unlikely to decline further [ 9‐ 11].
Anzeige
As tHPT increases the risk of renal allograft dysfunction and renal allograft loss [ 13, 14], osteoporosis [ 15], and bone fractures [ 16], adequate management is essential. Introduced in 2004, the calcimimetic drug cinacalcet (Mimpara ® , Amgen Inc., Thousand Oaks, CA, USA) is frequently used for the treatment of ESRD-related HPT [ 17, 18]. Cinacalcet suppresses the production of PTH by increasing the sensitivity of the calcium-sensing receptor of the parathyroid gland to calcium [ 19]. The United States Food and Drug Administration and the European Medicines Agency have approved cinacalcet for the treatment of secondary but not tertiary HPT. This is despite a number of small non-randomized studies demonstrating the safety of cinacalcet in tHPT, with gastrointestinal intolerance being the most common side effect [ 20].
Before the introduction of cinacalcet, the only treatment option for patients with tHPT was parathyroidectomy (PTx) [ 21]. This surgical procedure involves either subtotal or total PTx (with or without auto-transplantation), which are both effective and safe procedures [ 22, 23]. In sHPT, PTx was even associated with a lower risk of major cardiovascular events after surgery [ 24].
The effect of cinacalcet on cardiovascular morbidity and mortality has recently been studied in the EVOLVE trial [ 25]. This study in dialysis patients demonstrated that treatment with cinacalcet, despite lowering serum calcium in a sufficient way, does not reduce the risk of major cardiovascular events or death. In an additional meta-analysis of randomized controlled trials, cinacalcet did not improve overall survival of dialysis patients [ 26]. Consequently, the Australian Government stopped the reimbursement of cinacalcet (https://www.nps.org.au/radar/articles/sensipar-cinacalcet-pbs-listing-to-be-deleted#article).
The only randomized controlled trial comparing the effects of PTx and cinacalcet in the treatment of tHPT included 30 patients and concluded that 66% of patients treated with cinacalcet achieved normocalcemia compared with 100% after PTx [ 27]. As this is the only trial comparing these treatment modalities and having a small sample size, the optimal management strategy for tHPT remains unclear and additional studies including larger patient numbers are needed. In this study, the outcomes of treatment with PTx or cinacalcet for tHPT were compared in a larger cohort of patients derived from the data of two academic centers.
Anzeige

All patients who received a first KT at one of the two participating university medical centers between 1994 and 2015 and had a history of PTx or calcimimetic use, both before and after KT, were included. Their demographic and clinical data were stored in a central database. This study was approved by the institutional review boards of all participating centers.
Inclusion criteria for this study were a diagnosis of tHPT, age ≥ 18 years at the time of KT, and the availability of serum calcium and serum PTH concentrations after KT. Tertiary HPT was defined as the need for PTx within 3 years after KT or the (continuous) need of cinacalcet treatment at month 12 after KT. Patients with previous parathyroid surgery were excluded. Two groups were identified. Group 1 (cinacalcet group) consisted of patients who received treatment with cinacalcet at month 12 after their first KT without a history of PTx. Group 2 (PTx group) consisted of patients who underwent a PTx within 3 years of their first KT. Outcomes of the PTx group in the first year after KT are presented for patients who had not undergone PTx at the set time points.
The primary outcomes were serum calcium and PTH concentration 1 year after KT and 1 year after PTx. Secondary outcomes were the use of co-medication (calcium supplementation, vitamin D supplementation, cinacalcet) after KT and PTx and complications after KT and PTx.

Distribution was assessed using the Shapiro-Wilk test for normality. Continuous variables are presented as median with interquartile range (IQR), and categorical variables were described as count ( n) and percentage (%). Differences between the two groups were analyzed using the Mann-Whitney U test for continuous variables and the Pearson chi-square or Fisher’s exact test for nominal variables. The Wilcoxon signed-rank test was used to compare the differences between time points. Statistical analysis was performed using IBM SPSS Statistics 21 software (IBM Corp., Chicago, IL, USA).
Anzeige

The characteristics of the patients who underwent PTx are listed in Table 3. Median age at the time of PTx was 54.5 years; 66.7% of patients were classified as ASA III. Twelve patients (40%) underwent a PTx in the first year, and 18 underwent (60%) PTx in the second or third year after KT. Subtotal parathyroidectomy was performed in 83.3% of patients. Re-exploration due to persistent tHPT was performed in three (10%) patients. Initial operation was subtotal PTx in two patients and a less than subtotal PTx in one patient. Two patients required a second operation within the first post-operative month and one 10 months after initial surgery due to persistent HPT. There were no post-operative hematomas requiring re-exploration, no recurrent laryngeal nerve injuries, and no post-operative cardiovascular events, and there was no post-operative mortality. Post-operative hypocalcemia was apparent in 40% of patients.
Table 3
PTx characteristics
Data are expressed as median (interquartile range) or n (%)
PTx parathyroidectomy
Laboratory values before and after PTx are listed in Table 4. Serum calcium concentrations declined significantly after PTx; no patients were hypercalcemic 1 year after PTx. PTH concentrations declined significantly after PTx and were in the reference range. Vitamin D analogs were used in 42.9% of patients 1 year after PTx. One patient used cinacalcet (3.6%) after PTx. A total of 40% of patients used calcium supplementation 6 months after surgery.
Table 4
PTx outcomes
Data are expressed as median (interquartile range) or n (%)
PTx parathyroidectomy
^ p value: compared with preoperative measurements

List of collaborators of the Dutch Hyperparathyroidism Study Group:

Ethical approval for this study from the medical ethical committee boards of all centers was retrieved. According to the decision of the medical ethical committees, no informed consent was required. All procedures performed in studies involving human participants were in accordance with the ethical standards of the institutional and/or national research committee and with the 1964 Helsinki Declaration and its later amendments or comparable ethical standards.

The authors declare that they have no conflict of interest.
OpenAccessThis article is distributed under the terms of the Creative Commons Attribution 4.0 International License (http://creativecommons.org/licenses/by/4.0/), which permits unrestricted use, distribution, and reproduction in any medium, provided you give appropriate credit to the original author(s) and the source, provide a link to the Creative Commons license, and indicate if changes were made. 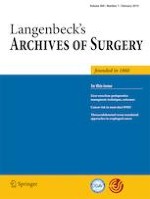