To compare the outcomes of PN to those of RN in very elderly patients treated for clinically localized renal tumor.

A purpose-built multi-institutional international database (RESURGE project) was used for this retrospective analysis. Patients over 75 years old and surgically treated for a suspicious of localized renal with either PN or RN were included in this database. Surgical, renal function and oncological outcomes were analyzed. Propensity scores for the predicted probability to receive PN in each patient were estimated by logistic regression models. Cox proportional hazard models were estimated to determine the relative change in hazard associated with PN vs RN on overall mortality (OM), cancer-specific mortality (CSM) and other-cause mortality (OCM).

Adoption of PN in very elderly patients with localized renal tumor does not compromise oncological outcomes, and it allows better functional preservation at mid-term (3-year) follow-up, relative to RN. Whether this functional benefit translates into a survival benefit remains to be determined. 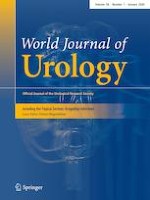 Complications related to use of mesh implants in surgical treatment of stress urinary incontinence and pelvic organ prolapse: infection or inflammation?

Impact of previous urethroplasty on the outcome after artificial urinary sphincter implantation: a prospective evaluation

Monopolar enucleation versus transurethral resection of the prostate for small- and medium-sized (< 80 cc) benign prostate hyperplasia: a prospective analysis

A systematic review of the clinical significance of nephrostomy urine cultures