Abnormal patellar tracking results in patello-femoral (PF) joint disorders and frequently in failure of total knee arthroplasty (TKA). It is fundamental to assess this tracking intra-operatively, i.e. since the implantation of the femoral and tibial components. The aim of this study was to assess the feasibility of three-dimensional anatomical-based patellar tracking intra-operatively in standard TKA. A surgical navigation system was utilized to test the new technique in-vitro. An original tracking device and a reference frame were designed and an articular convention for the description of PF joint kinematics was adopted. Six fresh-frozen amputated legs were analyzed with the new technique. Landmark digitations were used to define anatomical reference frames for the femur, tibia, and patella. Five trials of passive flexion were performed with 100 N force on the quadriceps, before and after standard knee arthroplasty. Patellar flexion, tilt, rotation and shift were calculated in addition to standard tibio-femoral (TF) joint kinematics. An intra-specimen repeatable path of motion over repetitions and a coupled path of motion throughout the flexion-extension cycle were observed in all intact knees, both at the TF and PF joints. Replication of the original PF motion in the intact knee was not fully accomplished in the replaced knee. These results revealed the feasibility and the necessity of patellar tracking during TKA. By monitoring intra-operatively also the PF kinematics, the surgeon has a more complete prediction of the performance of the final implant and therefore a valuable support for the most critical surgical decisions. 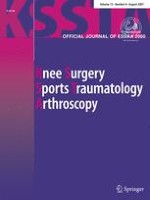