Epigastric herniation is a rather common condition with a reported prevalence up to 10 %. Only a minority is symptomatic, presumably the reason for the scarce literature on this subject. Epigastric hernias have specific characteristics for which several anatomical theories have been developed. Whether these descriptions of pathological mechanisms still hold with regard to the characteristics of epigastric hernia is the subject of this review. 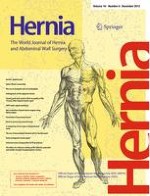 Use of a prosthetic mesh to prevent parastomal hernia during laparoscopic abdominoperineal resection: a randomized controlled trial