The pathomechanism of chronic spontaneous urticaria (CSU), defined by the recurrence of short-lived wheals for more than 6 weeks without apparent triggers, remained to be mysterious until 1986. In that year, skin reactivity to the injection of autologous serum was reported in about half of patients with CSU; that observation and the subsequent discovery of histamine-releasing autoantibodies against the high-affinity IgE receptor (FcεRI) and against IgE in patients with CSU were major breakthroughs in the pathogenesis of this disorder. A role for complement activation in autoantibody-dependent histamine release was subsequently demonstrated. CSU was hence considered as an autoimmune disorder due to histamine-releasing autoantibodies in a consistent proportion of cases. However, this model does not fit all cases and shows several inconsistencies. Recently, it was shown that sera from most CSU patients are able to degranulate also mast cells lacking FcεRI, suggesting the involvement of other as yet unknown mechanisms. New light on CSU pathogenesis was shed by the demonstration of coagulation activation and eosinophil involvement during active phases of the disease, paralleling urticaria severity. Finally, the efficacy of omalizumab (a recombinant humanized monoclonal IgG anti-IgE antibody) in the treatment of refractory CSU opened a new scenario in the pathophysiology of the disease. Indeed, omalizumab has multiple biological effects relevant in CSU pathogenesis, such as binding of free IgE, downregulation of mast cell function including expression of high affinity IgE receptors, and induction of eosinophil apoptosis. 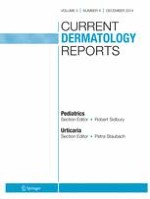 Diagnostic Imaging and Image-Guided Therapy for Hemangiomas and Vascular Malformations: What the Dermatologist Needs to Know

Alternative Medicine in Pediatric Dermatology: What Is the Evidence?

The Third Chair in the Examination Room: Practical Ethics of Decision-Making for the Pediatric Dermatologist