Myelosuppression is an important treatment-related toxicity among patients with cancer [ 1– 3], and occurs when the actively dividing hematopoietic stem and progenitor cells (HSPCs) in the bone marrow, which give rise to blood cell lineages, are damaged by cytotoxic chemotherapy. Chemotherapy-induced myelosuppression (CIM) commonly manifests as anemia, neutropenia, thrombocytopenia, and/or lymphopenia [ 1, 4– 6], and often results in an increased risk of life-threatening infections, shortness of breath, fatigue, and, potentially, excess bleeding. CIM is currently managed with chemotherapy dose reductions and delays, in addition to rescue interventions that stimulate or mobilize white cells (growth factors, such as granulocyte colony-stimulating factors [G-CSFs]); replenish red blood cells (RBCs) and platelets (transfusions); or stimulate RBC precursors (growth factors, such as erythropoiesis-stimulating agents [ESAs]) [ 4, 7– 9]. Despite the use of these interventions, however, clinically significant CIM continues to be a major acute toxicity of cytotoxic chemotherapy, possibly because currently available interventions are administered reactively, i.e., after HSPCs have been damaged by chemotherapy. The wide application of chemotherapy dose reductions and/or delays can also reduce the dose intensity of the chemotherapy and, potentially, its intended antitumor efficacy [ 3, 9– 11].
Anzeige
CIM is particularly relevant for patients with small cell lung cancer (SCLC), breast cancer, and colorectal cancer (CRC), for which chemotherapy, alone, or in combination with immune checkpoint inhibitors, remains a cornerstone of treatment [ 12– 16]. A systematic literature review to assess the real-world effectiveness and tolerability of treatments for SCLC, for example, showed that hematologic toxicities were the most commonly reported adverse events (AEs); neutropenia was reported in approximately two-thirds of patients receiving first-line chemotherapy, and almost three-quarters of patients receiving second-line chemotherapy [ 17].
Research into patients’ perceptions of the side effects of chemotherapy, including those associated with CIM, has been well documented, particularly with regard to symptoms of fatigue and effects on family [ 18– 22]. Overall, these studies suggest that patients’ concerns extend beyond physical symptoms to include non-physical concerns over daily routines, emotional well-being, and relationships [ 19, 21– 23]. By comparison, much less is known about how the management of CIM-associated side effects impacts patients. One survey of 15,785 adult cancer patients assessed the burden of time associated with medical visits for the management of chemotherapy-induced anemia (CIA) and neutropenia on patients and caregivers, and found that each visit involved approximately 2 h for the patient and over 1 h for caregivers [ 24]. Likewise, several surveys conducted to determine the impact of blood transfusions on patients with CIA have concluded that the time spent travelling to medical facilities, along with blood testing and the procedure itself, presents a considerable burden to patients [ 24– 26]. While these studies highlight the logistic burden associated with CIM, there remains a need for more research into the broader impact that CIM and its management has on patients’ lives, and to raise awareness among patients regarding the contribution of CIM to the overall toxicities associated with chemotherapy.
The purpose of the current study was to capture the perceptions, experiences, and challenges that patients encounter when diagnosed with myelosuppression as part of chemotherapy treatment for advanced solid tumors. Here, we describe patients’ perspectives on the management of CIM among those with breast, lung, and colorectal cancers, and the overall impact that myelosuppression has on patients’ lives.

The objectives of the study were to understand what treatments were administered for CIM and the challenges that patients encountered in receiving these; determine from a patient perspective whether CIM impacted dose/frequency of chemotherapy; gain insights into which member of the care team paid most attention to symptoms associated with CIM; and to capture the “patient voice” in how CIM impacted their life.
Anzeige
The study was conducted in accordance with the Declaration of Helsinki, and electronic consent was obtained from all participants prior to study entry. The study was reviewed by the Sterling institutional review board (IRB), and granted exemption status according to Department of Health and Human Services research criteria, signifying that full IRB review was not required.

Participants were identified from an online US panel of patients with a wide range of health conditions, including cancer. The target sample size was 300 participants living with breast cancer, lung cancer, or CRC, with a target ratio of 120:90:90 per cancer type, respectively. Male and female participants aged 18 years or more were included if they had received chemotherapy treatment within the past 12 months, and had experienced at least one episode of myelosuppression in the past year, encompassing the following: required blood transfusion; required G-CSF or granulocyte macrophage colony-stimulating factor (GM-CSF); required platelet transfusion; had a serious infection such as pneumonia or sepsis after receiving chemotherapy treatment; required ESAs to increase RBC count; or diagnosed with myelosuppression but with no treatment intervention.

The survey was designed, as per the study objectives, considering a review of published literature, and the draft questions were reviewed by experts for scientific content and question design. Questions, including screening and demographic questions, as well as core survey content, were presented sequentially in several formats, which included a choice of one response from a defined list of possible statements; questions that asked the participant to choose multiple responses (e.g., Select all that apply); dichotomous questions (Yes/No); and statements where the participant was asked to indicate their agreement using a Likert scale (e.g., 1 = Strongly disagree, 2 = Disagree, 3 = Neutral/not sure, 4 = Agree, 5 = Strongly agree). Lay definitions of key terms were provided (upon cursor selection) to aid response selection (Table  1). Participants were also asked to provide verbatim responses to a single open-ended question about how the side effects from myelosuppression impacted their lives.
Table 1
Lay definitions of key terms

A total of 2908 participants started the survey, of whom 2496 were disqualified, most commonly for not having received chemotherapy in the previous 12 months ( n = 1269) or for not having lung, breast, or colorectal cancer ( n = 334). A further 111 participants only partially completed the survey and were excluded from the analysis. The full survey was completed by 301 participants between November 11, 2019 and December 8, 2019. Of these, 291 (97%) recalled being told by their health care provider (HCP) that they had at least one episode of myelosuppression, and 10 (3%) recalled receiving treatment associated with myelosuppression.
Sixty percent of the participants were female, most (80%) were under 60 years of age, and 60% were working (Table  2). Fifty-one percent of the participants had breast cancer, 33% had lung cancer (of whom 46% had SCLC), and 16% had CRC. Seventy-five percent of participants had been diagnosed with cancer within the previous 3 years. All participants self-identified as having experienced some form of myelosuppression (anemia, neutropenia, thrombocytopenia, lymphopenia) in the past year. Self-reported comorbidities included diabetes (30%), depression (28%), and hypertension (23%).
Table 2
Participant baseline demographics, clinical characteristics, and myelosuppression
aParticipants could select more than one option
Most participants reported that they had been diagnosed with anemia (61%) or neutropenia (59%), while fewer participants reported a doctor’s diagnosis of lymphopenia (37%) or thrombocytopenia (34%; Table  2). Approximately one-third of participants reported receiving either G(M)-CSF, ESAs, or RBC transfusions (37%, 36%, and 35%, respectively); platelet transfusions were reported by 22% of participants; and 21% reported no treatment (Fig.  1). Illustrative comments in response to the open-ended question included:

I handled the side effects of myelosuppression pretty well during the chemotherapy. The thing that bothered me the most was the [pegfilgrastim] and I hated being injected. I had terrible bone pain after each shot.
[Myelosuppression] affected me greatly. I felt the side effects daily. My immune system was affected, and I had to get shots to increase my [blood] counts.

Did not get out as much, not able to work, always feeling tired. Had to take preventative measures to guard against diseases and germs.
It has made everyday life more difficult in all areas.
I had to severely curtail my social activities so I was not exposed to germs. I avoided family holiday activities [and] had some depression because of lack of social interaction and concern over potential infection.

Despite the use of chemotherapy dose reductions and delays, G(M)-CSF, ESA injections, and blood transfusions to address CIM, the findings of this survey suggest that the real-world impact of myelosuppression on patients is substantial, with almost all participants reporting a moderate or major impact on their lives. The data highlight that there is an unmet need to prevent or proactively manage CIM to improve patients’ quality of life and to improve communication between HCPs and their patients.

We give special thanks to the patients who participated in the survey, and to Dr Upal K Basu Roy from the LUNGevity Foundation (lung cancer advocacy community) for his involvement and authorship.

Data from this study have been previously published, in part, as a poster presentation at the International Society for Pharmacoeconomics and Outcomes Research (ISPOR) 2020 virtual conference, May 18–20, and as an electronic abstract at the American Society of Clinical Oncology (ASCO) 2020 annual meeting (virtual format), May 29–31.

The study was conducted in accordance with the Declaration of Helsinki, and electronic consent was obtained from all participants prior to study entry. The study was reviewed by the Sterling IRB, and granted exemption status according to Department of Health and Human Services research criteria, signifying that full IRB review was not required.

The datasets generated during and/or analyzed during the current study are available from the corresponding author on reasonable request.
Open AccessThis article is licensed under a Creative Commons Attribution-NonCommercial 4.0 International License, which permits any non-commercial use, sharing, adaptation, distribution and reproduction in any medium or format, as long as you give appropriate credit to the original author(s) and the source, provide a link to the Creative Commons licence, and indicate if changes were made. The images or other third party material in this article are included in the article's Creative Commons licence, unless indicated otherwise in a credit line to the material. If material is not included in the article's Creative Commons licence and your intended use is not permitted by statutory regulation or exceeds the permitted use, you will need to obtain permission directly from the copyright holder. To view a copy of this licence, visit http://​creativecommons.​org/​licenses/​by-nc/​4.​0/​. 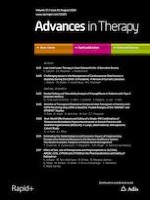 Correction to: Panel Discussion: Some Aspects of the Management of Patients with X-Linked Hypophosphataemic Rickets

Primary Care Physicians’ Knowledge of the Cardiovascular Effects of Diabetes Medications: Findings from an Online Survey

Effect of Sex, Use of Pantoprazole and Polymorphisms in SLC22A1, ABCB1, CES1, CYP3A5 and CYP2D6 on the Pharmacokinetics and Safety of Dabigatran