Prof Milind Hote,
Professor, CTVS,
All India Institute of Medical Sciences, New Delhi.
Q1. It is an interesting study that seeks to look at the issue of PPM from another angle based on the conclusion statement “LV mass regression was significantly higher in patients with iEOA more than 0.75. This can be considered as criteria for significant PPM in study population”.
The study proposes to use LV mass regression as the judging criteria; compared to the conventional use of iEOA. So do the authors mean the patients in whom we implant prosthetic valves with 0.75 iEOA, these patients are NOT LIKELY to have any disabling symptoms in the immediate term and long term?.
Ans.: The outcome measured in our study is the extent of LV regression following AVR and we observe that LV regression in patients with iEOA between 0.75 and 0.85 is comparable to that in patients with iEOA more than 0.85, the conventional cut off for PPM. This in turn is significantly higher than those with iEOA less than 0.75. Since the pathophysiology in AS is closely associated with LV hypertrophy, the risk of developing disabling symptoms in patients with iEOA between 0.75 and 0.85 should be equal to those with iEOA more than 0.85.
Q2. There are conflicting reports available in literature on correlation between PPM and mortality. Some series say the mortality is increased, others deny the same ( no effect/equivocal effect ), and there is a recent report to the contrary also –Ana Kadkhodayan et al in“ Structural Heart” journal, 2017 issue, wherein they compared the 30 day mortality and LV mass regression between 2 groups ( Surgical AVR vs TAVR ). They found that group with HIGHER LV mass regression had significantly HIGHER 30 day mortality.
What in your estimate, would be the impact of using iEOA of 0.75 on long term mortality?.
Ans.: We had zero mortality during the duration of our study. Hence, we cannot project any estimates regarding long term survival solely on the basis of this study.
In the study of Kadkhodayan et al which compared outcome of surgical AVR with transcatheter AVR, mean age of patients was 80, with 72% having CAD while our population is significantly younger with lesser co-morbidities. Moreover, the authors themselves have attributed this anomalous result to difference in geometrical factors rather than actual difference in LV mass. So it may not be prudent to compare these results directly.
Q3. Do the authors recommend a larger study ( the study population is small in the present study, n=37), for the readers to discern better the pros and cons of using conventional iEOA (0.85 vs 0.75) for their patients. If yes, what should be the design of such a study?
Ans.: A larger prospective observational study minimizing observer variability in echocardiographic measurements should be performed to ratify our observations. A randomized controlled trial may be considered in patients with smaller aortic roots, where AVR can achieve an iEOA >0.75, but an aortic root enlargement procedure is required to ensure iEOA >0.85.
Q4. PPM is common (20-70 %) in world literature, following AVR in Aortic stenosis patients, your take?.
Ans.: PPM is not uncommon, nor is PPM fully avoidable. Even with root enlargement procedures, a maximum of 2 size increment only can be achieved. Patients with higher BSA and small roots are always at risk of developing PPM. Apparently, many surgeons prefer PPM rather than doing complex root enlargement procedures.
Q5. LV regression occurs in all; more in patients with no PPM; less regression is seen in patients having PPM. These 2 points are pretty well established. Some papers say that morbidity – mortality is more if we see the subset of patients having reduced EF. (Ruel M, Al-Faleh H, Kulik A, Chan KL, Mesana TG, Burwash IG. J Thorac Cardiovasc Surg. 2006 May;131(5):1036-44).
Would the authors suggest adding correlation with preoperative EF in their next study group of patients?
Ans.: Yes. Since we did not observe any mortality, it would have been irrelevant in this study. But in any further study, this should be considered as well.
Q6. Rahimtoola gave a very simple and elegant definition of PPM – If prosthetic valve area is less than natural area, (0.85), it qualifies as PPM. His onus was on suggesting that the abnormal hemodynamics that will occur as a result of PPM, are likely to cause morbidity and mortality. Literature is equivocal about the true correlation between PPM – LV regression – resulting patient morbidity & mortality. So why should we shift the goalpost of defining PPM from 0.85 to 0.75? Are we not recommending incomplete surgery?.
Ans.: Original benchmark of PPM is based on theoretical predictions and hemodynamic calculations. We on the other hand have attempted to assess the adequacy of valve area based on LV regression. LV regression is the most important quantifiable parameter which is believed to be capable of influencing clinical outcome after AVR.
Most of the systems in human body come with a level of redundancy and exact replication of the original iEOA may not be necessary to achieve an acceptable clinical outcome.
Q7. Why the observed regression is more in some patients and less in others for the same iEOA? Do the authors think that there is some genetic variability in the degree of regression that may occur in a patient after say a 50 mm Hg reduction in valve gradient?.
Ans.: There can be other confounding variables including genetic variability, hypertension and use of medications like ACE inhibitors that could have influenced LV regression. The study can be repeated in a bigger population and the data can be subjected to multivariate analysis to detect these factors.

Patient prosthesis mismatch is known to alter post-operative remodeling of left ventricle adversely in aortic stenosis patients. An indexed orifice area of 0.85 is considered as conventional cutoff for patient prosthesis mismatch based on hemodynamic principles. Many patients have smaller annulus and annulus enlargement techniques may be required to avoid this benchmark which complicates the surgery.

A single-center retrospective observational study of all patients who underwent aortic valve replacement surgery for severe aortic stenosis between July 2015 and December 2015 was conducted. Patients who underwent concomitant revascularization or other valve surgery were excluded. Data regarding conventional risk factors for PPM, valve type, and indexed orifice area as well as pre-operative and late post-operative LV mass were collected.

The incidence of PPM was found to be comparable to literature. There is a positive correlation between left ventricular regression and indexed effective orifice area of the prosthetic valve. Left ventricular regression was significantly higher in patients with an indexed effective area more than 0.75. This can be considered as criteria for significant PPM in study population. 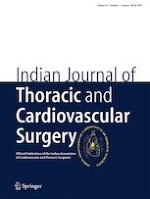 Surgical treatment and outcome of pulmonary hamartoma: a retrospective study of 10-year experience