Data were obtained for primary TKAs performed at a single centre over a 12-month period. Data were collected pre-operatively and 12-month postoperatively with the Oxford Knee Score (OKS) measuring pain and function, the EQ-5D-3L measuring general health status, the Forgotten Joint Score-12 (FJS-12) measuring joint awareness and a single question on treatment satisfaction. Change in scores following surgery was compared across the BMI categories identified by the World Health Organization (< 25.0, 25.0–29.9, 30.0–34.9, 35.0–39.9 and ≥ 40.0). Differences in postoperative improvement between the BMI groups were analysed with an overall Kruskal–Wallis test, with post hoc pairwise comparisons between BMI groups with Mann–Whitney tests.

In TKA patients, outcome parameters are influenced differently by BMI. Our study showed a negative impact of BMI on postoperative improvement in joint awareness and satisfaction scores, but there was no influence on pain, function or general health scores. This information may be useful in terms of setting expectations expectation in obese patients planning to undergo TKA. 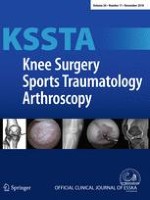