To define the spectrum and phenotypic characteristics of systemic autoinflammatory diseases (SAIDs) other than familial Mediterranean fever (FMF) in Arab children and to delineate diagnostic evaluation. Data retrospectively collected on patients with clinical and/or genetically proven SAIDs other than FMF at 10 tertiary Arab pediatric rheumatology clinics from 1990 to 2018. The collected data comprised the clinical findings and diagnostic evaluation including genetic testing, the provided treatment and the accrual damage related to SAIDs. A total of 144 patients (93 female) with a median age at onset of 2.5 (range 0.1–12) years were enrolled. The initial diagnosis was inaccurate in 49.3%. Consanguinity rate among parents was 74.6%. The median time-to-diagnosis for all SAIDs was 2.5 (range 0.1–10) years. There were 104 patients (72.2%) with a confirmed diagnosis and 40 patients with suspected SAIDs. Seventy-two had monogenic and 66 patients with multifactorial SAIDs while six patients had undifferentiated SAIDs. The most frequent monogenic SAIDs were LACC1 mediated monogenic disorders (n = 23) followed by CAPS (12), TRAPS (12), HIDS (12), and Majeed’s syndrome (6). The most frequent multifactorial SAIDs was CRMO (34), followed by PFAPA (18), and early onset sarcoidosis (EOS) (14). Genetic analysis was performed in 69 patients; 50 patients had genetically confirmed disease. Corticosteroid used for 93 patients while biologic agents for 96 patients. Overall, growth failure was the most frequent accrual damage (36%), followed by cognitive impairment (13%). There were three deaths because of infection. This study shows a heterogenous spectrum of SAIDs with a high number of genetically confirmed monogenic diseases; notably, LACC1 associated diseases. Hopefully, this work will be the first step for a prospective registry for SAIDs in Arab countries. 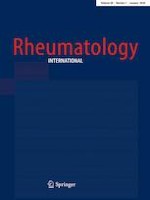 Familial Mediterranean fever and atherosclerosis in childhood and adolescence

Familial Mediterranean fever is associated with a wide spectrum of inflammatory disorders: results from a large cohort study

The peculiarities and treatment outcomes of the spinal form of chronic non-bacterial osteomyelitis in children: a retrospective cohort study